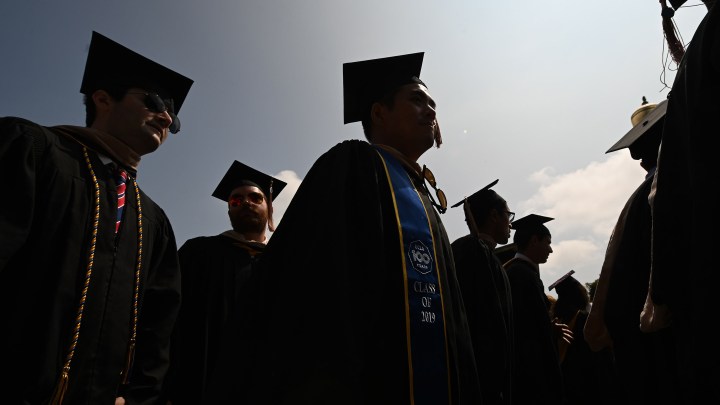 COPY
The moratorium on federal student debt is set to end on May 1, but there's uncertainty as to if that'll actually still happen. Robyn Beck/AFP via Getty Images

The moratorium on federal student debt is set to end on May 1, but there's uncertainty as to if that'll actually still happen. Robyn Beck/AFP via Getty Images
Listen Now

About 30 million to 40 million Americans have gotten a financial reprieve over the past two years: They haven’t had to pay principal or interest on their federal direct student loans.

The student-debt moratorium was originally passed as part of the CARES Act to help the economy and consumers weather the severe downturn at the start of the pandemic. It’s been extended several times, but now it’s set to expire on May 1 — that is, unless it’s extended yet again.

Then, the Biden administration extended it again.

And now, said Justin Draeger at the National Association of Student Financial Aid Administrators: “It’s very unclear. Nobody’s sure that May 1 is actually going to be the repayment start date.”

Loan servicers are notifying borrowers about payment options and the like. But the Education Department has advised them not to send out bills or loan statements yet.

The Education Department told Marketplace in an email that it “will continue communicating directly with borrowers about federal student loan repayment by providing clear and timely updates.”

All this, said Draeger, “creates confusion, and not just for loan servicers, but colleges and universities, who are trying to prepare their students and graduates for loan repayment.”

One graduate who’s preparing for the change is 31-year-old Chris Terry of Nashville, Tennessee. He’s got six figures in student debt for pharmacy school, and he said he’s really benefited from not paying for the past two years.

“That freed up quite a bit of our monthly income. Almost 10% of what we actually brought home we were able use every month,” he said.

He and his wife had a second kid and bought a bigger house. Now, he’s prepared to cut back if the moratorium ends — but he hopes it doesn’t.

“Certainly as the May deadline approaches, and we have to think about that, we’re going to have to be more creative with our budget.”

Some progressives are urging the Biden administration to push off resuming student loan payments for even longer.

“What we know is that if student loan payments resume in May, it will undermine the recovery. Families are dealing with numerous economic stressors, whether you’re looking at supply chain disruptions, gas prices, health care costs,” said Ali Bustamante is with the Roosevelt Institute.

But with the economy mostly recovered, the moratorium’s no longer needed, said Marc Goldwein at the fiscally conservative Committee for a Responsible Federal Budget.

“The unemployment rate is the third-lowest it’s been in the last 50 years. Among college graduates it’s approaching 2%,” he said. “This program is costing us $50 billion a year, which is more than basically everything else we spend on higher ed.”

And he said right now, the moratorium’s mainly benefiting high-income professionals with a lot of student debt.

Clarification (March 16, 2022): This story has been amended to provide context for comments by the Center for a Responsible Federal Budget.