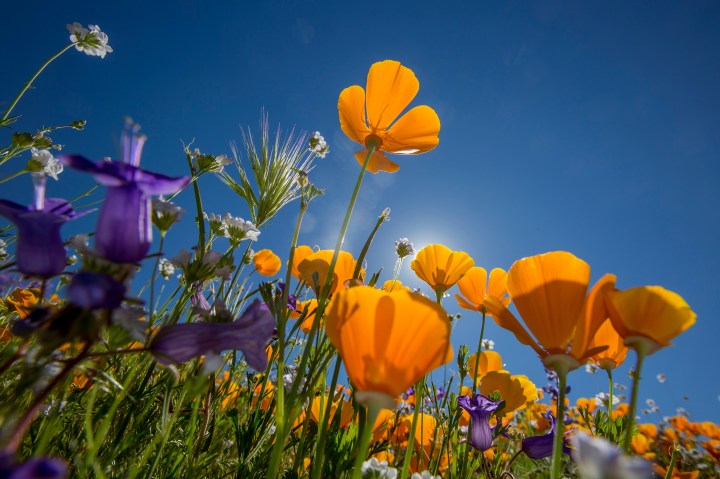 A U.S. bill passed by the Senate would make Daylight Saving Time permanent, ending the need to adjust our clocks every fall and spring. Above, California poppies and Canterbury bells bloom at Diamond Valley Lake, near Hemet, California. David McNew/Getty Images

A U.S. bill passed by the Senate would make Daylight Saving Time permanent, ending the need to adjust our clocks every fall and spring. Above, California poppies and Canterbury bells bloom at Diamond Valley Lake, near Hemet, California. David McNew/Getty Images

Most Americans recently set their clocks forward by an hour for daylight saving time, making our evenings brighter and mornings darker.

But the biannual change to our clocks may end now that the Senate has passed the Sunshine Protection Act, which was originally introduced by Republican Sen. Marco Rubio of Florida back in 2018.

Last year, he reintroduced the bill, which is co-sponsored by lawmakers from both major political parties.

The bill would keep daylight saving time year-round and take effect next year. It now moves to the House of Representatives for approval before it can be signed into law by President Joe Biden.

In a press release about the act, lawmakers cited health, economic and public safety benefits for the change, such as the potential for an increase in consumer spending and a reduction in car crashes.

Hawaii and Arizona — with the exception of the Navajo Nation — do not observe daylight saving time. Nor do the U.S. territories, including Puerto Rico, Guam, American Samoa and the U.S. Virgin Islands.

A British man by the name of Willliam Willett devised the plan after observing that people were sleeping through “precious hours of daylight” during the summertime,” Downing said.

The British Parliament was skeptical of a time shift and debated its merits for a decade.

Germany, however, embraced the idea after catching wind of it and became the first country to enact a daylight saving law. Its aim was to save energy for the war.

“The British were so embarrassed that they’d been debating it for 10 years, they immediately adopted it,” Downing said.

The United States established its own daylight saving law in 1918. Republican Sen. James Lankford of Oklahoma argued that “it is well past time to lock the clock and end this experiment.”

David Wagner, an associate professor of management at the University of Oregon, is excited by the move and said it is “a long time coming.”

Many states have been pushing for legislation that would stop time changes by sticking with either daylight saving time or standard time.

This move is important because it would stop us from switching our clocks back and forth, not because having that extra hour of sunlight is inherently better, Wagner explained.

And those shifts can be harmful. Wagner has conducted studies on this topic with other researchers, finding that there’s an increase in workplace injuries following the change to daylight saving time due to lost sleep.

Coal mining injuries increased almost 6% on the Monday after the switch, and on top of that, workers saw a roughly 67% increase in lost workdays because of those injuries, according to work by Wagner and Christopher M. Barnes.

Dan Phaneuf, a professor of agricultural and applied economics at the University of Wisconsin-Madison, said it’s unclear whether we would be better off operating on daylight saving time vs. standard time year-round.

But, compared to changing the clocks twice a year, he said he thinks this is a good decision.

Permanently operating according to DST will come with its own set of pros and cons. As you might expect, Wagner summed it up as: “It’s complicated.”

Businesses have the advantage of seeing increased purchasing activity when there’s an extra hour of sunlight.

“It has been a remarkably effective retail spending plan,” Downing told us in 2018. “If you give Americans sunlight after work, they tend to stop and shop on their way home.”

Steve Calandrillo, a law professor at the University of Washington who has testified before Congress about the merits of ending these shifts, said over email that an additional hour of sunlight would decrease net vehicle fatalities and accidents, noting that pedestrians are also vulnerable to getting hit by cars during twilight.

However, some misconceptions about daylight saving time persist, such as the notion that it helps conserve energy, even though researchers find little evidence supporting this.

Matthew J. Kotchen and Laura E. Grant, looking at the state of Indiana, found that daylight saving time actually increased the demand for residential electricity, pushing up electricity bills by an extra $9 million a year because of extra heating and cooling use.

And the U.S. Chamber of Commerce, according to Downing, created the myth that farmers would benefit from daylight saving time, even though they hated it because they would lose an hour of daylight in the morning.

Some health experts agree that we should stop changing the clocks — but make standard time permanent instead.

In a press release, the American Academy of Sleep Medicine stated that the “current evidence best supports the adoption of year-round standard time, which aligns best with human circadian biology and provides distinct benefits for public health and safety.”

While Calandrillo has supported a permanent daylight saving time, he said darker mornings “would impose additional danger … especially for school children.” So, to address that concern, school times should start later in the winter to accommodate children, he added.

Wagner also agrees that we should “be more thoughtful” about school start times, pointing out that children are more alert later in the day.

Not only are early start times for schools a public health issue, but the economics of switching to a later start time make sense. Changing up start times is one of the least expensive options schools have to increase student performance, according to Brian Jacob, an economics and public policy professor at the University of Michigan who co-authored a study on this topic.

“This is not like hiring extra teachers to reduce class size, or building a big new expensive building,” he told Marketplace back in 2014.

California has a jumpstart. In 2019, it became the first state to mandate that middle and high schools have later start times. The law goes into effect in the 2022-2023 school year.