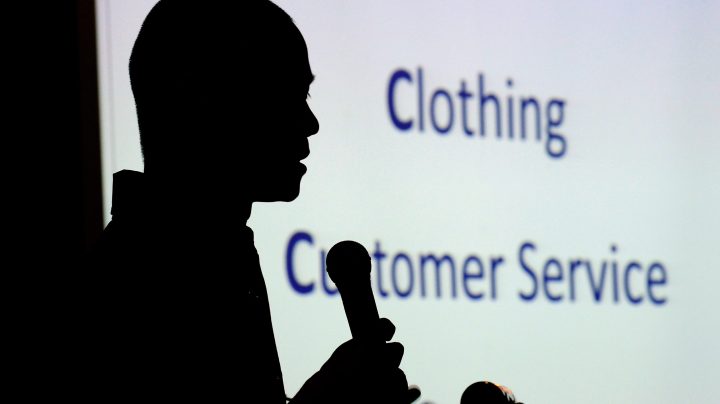 In a new book, Wall Street Journal reporters Kirsten Grind and Katherine Sayer explore the life and legacy of famed entrepreneur and Zappos co-founder, Tony Hsieh. Above: Hsieh silhouetted as he delivers a keynote presentation in 2010. Photo by Ethan Miller/Getty Images
Listen Now

In the 2000s and early 2010s, journalists, academics, and business leaders from all over the world visited the Las Vegas headquarters of the online shoe and clothing retailer Zappos. The company had become famous for a zany workplace culture centered around “delivering happiness” to customers and employees.

“Over time, we keep expanding the vision, and so our vision and mission now is about delivering happiness to the world,” Zappos CEO Tony Hsieh told “Marketplace” host Kai Ryssdal in a 2010 interview. That mission was the subject of a best-selling book Hsieh wrote called “Delivering Happiness,” which heightened his status as a workplace culture guru.

“He just, unfortunately, didn’t take care of himself,” said Kirsten Grind, a reporter for The Wall Street Journal in a recent interview with Ryssdal. In a new book called, “Happy at any Cost: The Revolutionary Vision and Fatal Quest of Zappos CEO Tony Hsieh,” Grind and fellow WSJ reporter Katherine Sayre explore the life and ultimate downfall of the famed CEO.

Tony Hsieh officially left Zappos in August of 2020 and died a few months later at the age of 46. “I think he was constantly seeking, but not always reflecting on his own personal happiness,” said Sayre.

Click the audio player above to listen to hear Ryssdal’s conversation with Grind and Sayre about the life and legacy of Tony Hsieh. The following is an adapted excerpt from their book.

Tony Hsieh’s sudden death in late November 2020 at only 46 years of age sent shock waves through the business community and around the world.

One of America’s most beloved entrepreneurs, Tony was adored and respected for his unconventional ideas on workplace culture and happiness, which he detailed in his best-selling book, “Delivering Happiness: A Path to Profits, Passion, and Purpose.” A near billionaire, he had almost single-handedly developed downtown Las Vegas over the previous decade. He had built one of the most joyful companies on earth as chief executive officer of the shoe-selling site Zappos, now owned by Amazon. Thousands of people around the world, many of whom didn’t even know him, loved him because of his singular ability to lift people up and see the best in them.

His story might have ended there, with the beautiful obituaries published in newspapers and magazines that detailed his life and accomplishments, including where we work as reporters, The Wall Street Journal.

But Tony died under mysterious circumstances at a young age in a shed fire in Connecticut. Almost immediately after his death, we began hearing stories about his last year as he embarked on a new vision in a new town, Park City, Utah. He had surrounded himself with people who were taking advantage of him. We were told that alcohol and drugs had played a role in his death, but we weren’t sure how. We learned that he might have suffered from mental health issues, possibly worsened by the isolation of the COVID-19 pandemic. Meanwhile, few details about the fire that had killed him were released in the weeks after his death, including why Tony was in New London, Connecticut, at all.

How does an accomplished chief executive officer, one of America’s most beloved entrepreneurs, end up in a burning shed thousands of miles away from his home city of Las Vegas in the middle of a devastating pandemic?

As reporters at The Wall Street Journal, we wanted to find the answer. In stories for the Journal in 2020 and 2021, we explored Tony’s struggles with alcohol and, later, drugs. We deeply examined the entourage who surrounded him in Park City, Utah, during 2020, a group of friends and employees—including his own brother—many of whom enabled Tony’s worsening drug addiction while feeding off his wealth.

But we quickly realized that Tony’s path to the burning shed in New London, Connecticut, was much more complicated and heartbreaking than we had first realized. His journey had actually started years earlier, with a fundamental goal that many people can surely relate to: he wanted to be happy. His desire to achieve happiness, and especially to spread it to those around him, was so great that he staked his entire career, and his livelihood, on that goal. It was his life’s mission, and it was ultimately his downfall.

At Zappos, he infused the company with a culture known for its outrageous parties, constant happy hours, and a list of values that encouraged workers to be “a little weird,” an unusual workplace renaissance he detailed in his book, “Delivering Happiness.” Determined to bring joy to people who bought shoes from Zappos and those who worked for him, he believed strongly in the value of customer service and in building a workplace culture that would allow all employees to be themselves.

With the line between friends and employees already blurred, Tony took his happiness goal one step further by empowering his workers to take on more responsibility in a much-watched management experiment called holacracy. This decentralized organizational theory meant that he refused to adhere to a traditional company structure or the confines of a chief executive officer role; he thought everyone should be empowered to achieve his or her own goals.

In downtown Las Vegas, Tony Hsieh dedicated $350 million of his own fortune to turning the forgotten corner of the city into an urban theme park filled with brightly colored art, bars, and event venues. He wooed entrepreneurs from across the country, investing in their businesses in exchange for their moving to Vegas. He asked his friends and acquaintances, “What do you need to live up to your full potential?” and then gave them the money or time they required. He rarely directed those questions inward, in part to avoid addressing his own problems. He failed to take care of himself.