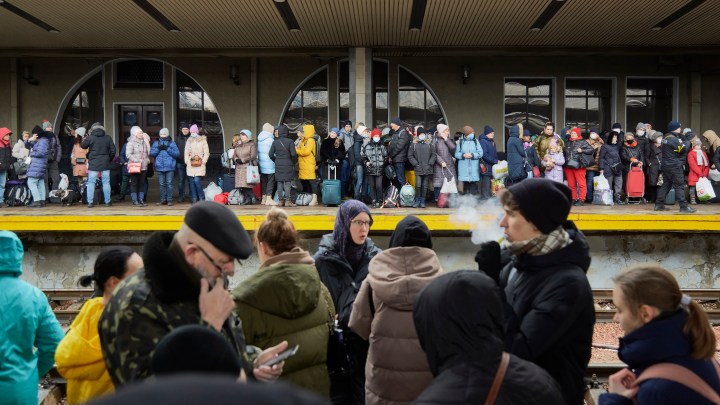 Over the last few years, Ukraine has become an essential part of the global tech economy. Last year, it exported $6.8 billion worth of technology services, up 36% from the year before.

International companies have turned to Ukraine for its educated engineering and computer science workforce — and its low wages compared to other parts of Europe. So when Russia invaded Ukraine, it wasn’t just countries that went on high alert; companies did too.

One of them was JustAnswer. The company connects users who have questions to experts who can answer them. It’s headquartered in San Francisco, but a quarter of its workforce is in Ukraine, and the company’s had a presence there for more than a decade. Its 252 employees in Ukraine do everything from engineering to design to human resources. So, JustAnswer has been preparing for the possibility of war for years.

Kurtzig said that included printing out documents so they’d have backups of employment and lease agreements, backing up data to U.S. servers and buying diesel generators and satellite phones.

The company also offered to relocate employees who wanted to move to safer parts of the country and is giving them as much paid time off as they need.

Kurtzig said JustAnswer is committed to helping its workers in Ukraine any way it can, even if that hurts the services it offers — which it has.

“We release, constantly, new features, bug fixes, all kinds of things to improve our service,” Kurtzig said. “The amount of things we’re releasing has been cut in half.”

At the same time that he’s worried about his employees, Kurtzig has to think about his company and its plans to eventually go public. “It hurts, and it will slow us down,” he said. “That’s the kind of stuff that unfortunately may get cut temporarily, is some of the IPO preparedness stuff that we’ve been doing.”

Many big American tech companies, including Snap, Lyft, Microsoft, Cisco and Google, have employees in Ukraine. As do companies all over the world.

Wix, which helps people build their own websites, has its headquarters in Tel Aviv, Israel. Some 15% of its workforce is in Ukraine, and the company has been making contingency plans for weeks.

“We approached about 30 or 40 employees who were kind of the critical functions that we knew we cannot replicate outside of Ukraine and asked them if they would be willing to move to Krakow in Poland,” said Nir Zohar, Wix’s president and chief operating officer.

Wix then chartered flights to move other employees and their families to Turkey. Now, with Ukranian airspace closed, Wix employees are meeting their Ukrainian colleagues at the Polish border with things like food and clothing.

This all costs money, of course. “This is not the time to count the dimes,” Zohar said.

Companies with employees or contractors in Ukraine should be prepared to be unable to talk with them.

“Communications infrastructure is struggling to stay online,” said Chester Wisniewski, a principal research scientist with the security firm Sophos. “There have been continuous disruptions in both internet and mobile phone technology around the country.”

This can be challenging in a world where we’re used to instantaneous communication.

“We have no experience at knowing what it’s like when some arm of the internet is cut off,” Wisniewski said.

If they can, many tech workers in Ukraine are continuing to just do their jobs, wherever they are.

“They want to focus on something other than the war, and they want to maintain a degree of normality,” said Kerry Hallard, who leads the Global Sourcing Association, which has members in Ukraine.

“For the Ukrainian economy and for us as a country, it is of course very important also to keep the economy going,” said Nataly Veremeeva, the director of TechUkraine, a group devoted to growing the industry there.

Since Veremeeva, a Kyiv resident, can’t really do her regular job, she’s working to make sure the rest of the world understands what’s going on in Ukraine.

“The distinguished feature of Ukrainians is self-organization. So, you see that there is some area that needs to be covered, you gather your like-minders, and you start doing,” she said.

Veremeeva believes this can-do mindset will help Ukrainians get through the present — and hopefully protect the country’s future.