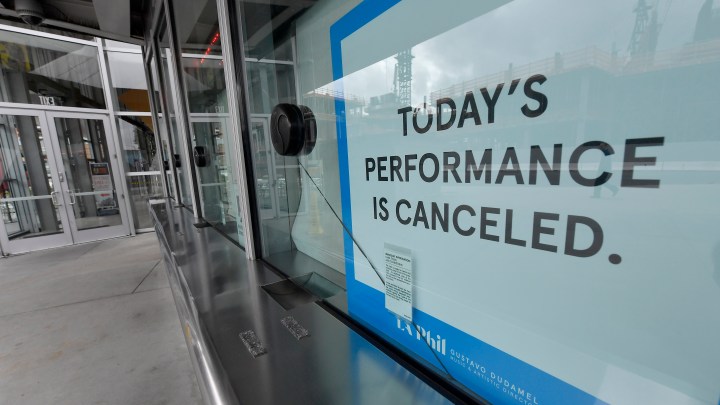 COPY
"I never considered shutting it down," said Tobi Parks of xBk. "And, you know, I was always confident and had the support of .... the team of allies." Frazer Harrison/Getty Images

"I never considered shutting it down," said Tobi Parks of xBk. "And, you know, I was always confident and had the support of .... the team of allies." Frazer Harrison/Getty Images
Listen Now

The live-music industry is in a state of limbo. On one hand, artists like the Weeknd, Harry Styles and Dua Lipa are revving up for their tours across the globe. Coachella is also slated to take place this year — without mask or vaccine mandates. However, the omicron coronavirus variant hasn’t completely subsided. Artists like Doja Cat and Adele have had to cancel recent appearances due to COVID-19 concerns in their crew. Plus, many fans are buying tickets but not showing up, leaving money on the table for concert venue operators who are still in a difficult place.

We spoke to Tobi Parks, owner of xBk, a concert venue in Des Moines, Iowa, back in April. Parks had just applied for the Shuttered Venue Operators Grant, which started as part of the Save Our Stages Act. At that time, she told us that the revenue would mean “the difference between death and survival.” Now, xBk has reopened and is hoping to kick off the concert season.

“Marketplace” host Kai Ryssdal talked to Parks about the challenges of running a concert venue through the ups and downs of the pandemic. The following is an edited transcript of their conversation.

Tobi Parks: You know, things were getting pretty OK. I mean, as you are probably aware, we worked very closely with the [Small Business Administration], with the Shuttered Venue Operators Grant program, and our venue was a recipient of that program — which really helped us get through the hardest parts of the pandemic. And we had a pretty solid fourth quarter until the omicron wave came through, which really sort of put us back what felt like almost in square one, where we were in March of 2020. We are just now reopening after actually being completely shuttered for the month of January. We reopened last weekend to some success. So we’re looking positively forward.

Parks: Absolutely, it’s still the case. I mean, you know, the tough part about this is even though the entire industry has done a lot to do our best to keep artists on the road and to keep our businesses open, you know, there’s not much that we can do if somebody in a tour party gets ill, right? So we’re still a bit in that space. You know, the local and state restrictions are not quite as daunting as what they were sort of at the beginning of the pandemic. You know, most everything is open, but it’s now really just trying to manage, you know, the artists’ cancellations and trying to keep artists safe. So you know, they don’t get sick, and so they can stay on the road and keep us all going.

Ryssdal: How have you been able to keep this going as a business proposition? Because I’m going to guess — well, first of all, you were closed most of January, right? So you’re not getting any revenue, but you’ve still got to pay the rent. So I’m guessing that comes out of whatever reserves you have or eventually your pocket. I’m gonna guess that crowds, you haven’t been packing them in, I’m sure, the past year. So, I mean, is this all on your credit card? What’s happening?

Parks: You know, as I said, we were very lucky to be able to access the Shuttered Venue Operators Grant program through the federal government, and that really kept us afloat. And, you know, without the support of our legislative allies and the support of the SBA, getting that money out to venues like ours, you know, we would have been shuttered. We are fortunate that we did have a little bit of a cushion to manage the downfall for, you know, late December and January, but it’s still something that we’re facing. And you know, even though we’re open now, and we can be open and, you know, consumer confidence is still a bit waning, we’re hoping in the next coming months, as you know, we sort of get through a bit of the thick of omicron that things will get better, but it’s still hard. So, you know, we’re just taking it day by day.

Ryssdal: Did you ever think about shutting it down, and just walking away?

Parks: You know — myself personally — no. You know, if you might recall, xBk opened in September of 2019. So we were only open for six months before the pandemic hit, and, you know, when you put your life savings and your love and your heart into something, it’s hard to let it go. So, you know, no, I never considered shutting it down. And, you know, I was always confident and had the support of, you know, the team of allies, of other independent promoters and venues around me to help keep me going.