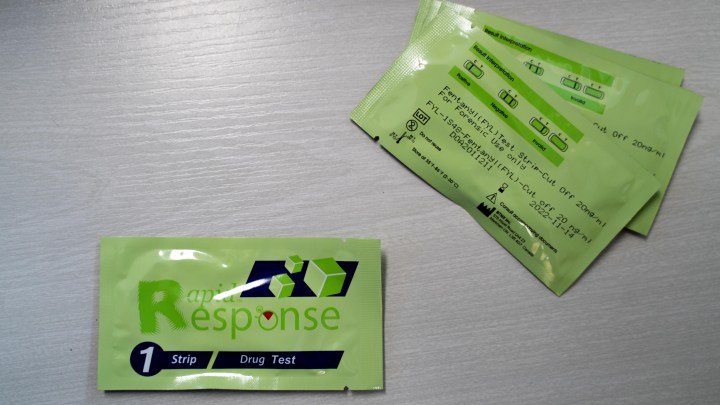 COPY
Packages of fentanyl test strips and instructions for their use. Some experts and officials say they can save lives, but they are outlawed in many states. Gustavo Sagrero/Boise State Public Radio

Packages of fentanyl test strips and instructions for their use. Some experts and officials say they can save lives, but they are outlawed in many states. Gustavo Sagrero/Boise State Public Radio
Listen Now

The United States reached a grim milestone last year: Between April 2020 and April 2021, more than 100,000 people died of drug overdoses. A record.

One thing that’s driving the increase is the synthetic opioid fentanyl. The drug is prescribed by doctors for severe pain but can kill when it’s in counterfeit pills or other drugs.

There are ways to test for it using test strips. The items are inexpensive, at roughly $1 each. They work like rapid COVID tests: one line if fentanyl is present in a drug’s solution, two if not.

Some health officials and researchers say the tests could save lives.

“What we have seen over and over and over again is that it does change the behavior of the drug user,” said Aryan Showers, the policy director with the New Mexico Department of Health. “I mean, they will take less. They will take it in a slower pace.”

“They are designed to look like oxycodone tablets, so they’re round, light blue to green in color, and they have an imprint of an ‘m’ on one side and a ’30’ on the other,” said Idaho forensic scientist Kerry Hogan.

But while fentanyl is showing up more and more, the test strips are not widely available everywhere. As of May, they were illegal in more than half of U.S. states. That’s according to the nonprofit Legislative Analysis and Public Policy Association, or LAPPA.

LAPPA attorney Jon Woodruff said that in the 1970s, many states copied a U.S. Drug Enforcement Administration definition of illegal paraphernalia into their own laws. That definition includes tests for illicit drugs.

“The question is, how do you get the inertia of having a law that’s been in place for so long changed enough to sort of clearly make it allowable?” he said.

Woodruff said LAPPA plans to draft new language any state could use in legislation that would legalize test strips.

But many legislatures around the U.S. are already trying to change their laws. Nevada legalized the test strips last year. But in Pennsylvania, the measure didn’t get far.

“They just didn’t put the effort behind it that they needed to because there was this other thing called COVID happening at the same time,” she said.

Messerschmidt said that’s why her health department isn’t pushing to change the ban in Idaho this year — she wants to educate lawmakers first.

“Our stance right now as a department is to really focus on providing some education to our partners about what that legislative change would mean,” she said.

Even if the strips were legal, Messerschmidt said, there’s no guarantee that everyone who could benefit from them would get them. “And so I think it’s more important getting the message out that drugs can be really risky and deadly.”

New Mexico’s bill also died in committee last year, and Showers of the Department of Health said her state’s failure to pass it has already cost hundreds of lives.

“Around 250 people would have likely been saved had we initially, when we first introduced this bill, if we had gotten it to pass. So we’re too late,” she said.

“Fentanyl probably isn’t going anywhere soon, but we’re already seeing analogs to fentanyl that are popping up in the drug supply that are actually not being detected by fentanyl test strips,” she said.

In the states where fentanyl test strips are legal, authorities can use new tools from the federal government. Last year, the Centers for Disease Control and Prevention made it legal for states to use federal grant funds to buy test strips to curb fentanyl overdoses.