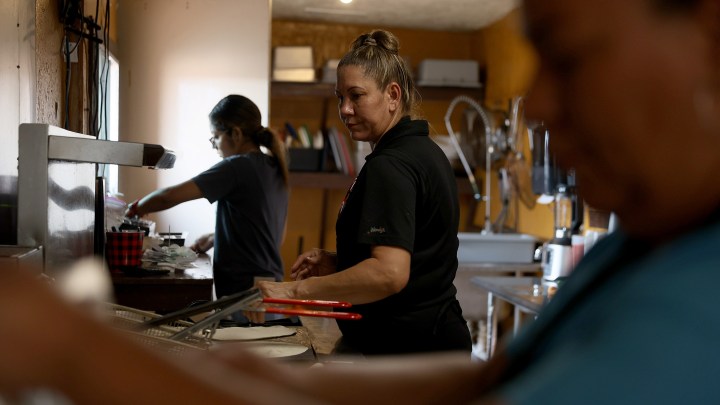 COPY
Women and workers of color are more likely to work in the service sector and feel the effects of last-minute schedule changes. Above, fast food workers prepare tortillas in a Texas restaurant. Joe Raedle/Getty Images

Women and workers of color are more likely to work in the service sector and feel the effects of last-minute schedule changes. Above, fast food workers prepare tortillas in a Texas restaurant. Joe Raedle/Getty Images
Listen Now

Despite labor shortages and low unemployment, many shift workers in retail and restaurants don’t have certainty about their hours and their schedules. That’s according to a recent report from researchers at The Shift Project, which tracks the schedules of workers in the service sector.

And this uncertainty persists even with high numbers of employees quitting these kinds of jobs for better opportunities.

“It makes it very difficult for workers to do the basics, like pay their bills.”

Workers who do have a guaranteed work week say they have a better quality of life, per Ted Pappageorge, president of the Culinary Workers Union in Las Vegas.

“They know that they can schedule childcare, they know they can live their lives. And they’re not simply waiting by the phone for their scheduling,” Pappageorge said.

Scheduling continued to be a problem in 2021 even though many employers promised to do better, according to Harvard sociologist Daniel Schneider.

“It’s so baked into their business models that even a tight labor market is not enough to get them to let go,” he said.

Schneider added that workers of color and women are most affected because they’re more likely to hold service sector jobs.