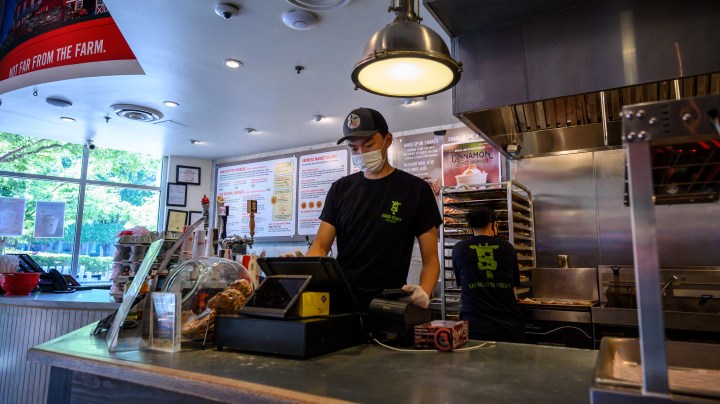 COPY
Because people working in leisure and hospitality are less likely to receive paid sick time, they wouldn't show up on January payrolls if they were out sick with omicron during its peak. Eric Baradat/AFP via Getty Images
COVID & Unemployment

Because people working in leisure and hospitality are less likely to receive paid sick time, they wouldn't show up on January payrolls if they were out sick with omicron during its peak. Eric Baradat/AFP via Getty Images
Listen Now

On Wednesday, we got the first glimpse of how omicron impacted last month’s job market. In one word: gnarly.

According to the payroll company ADP, private companies shed 301,000 jobs in January — the biggest monthly loss since early in the pandemic.

The reference week for January was the 9th through the 15th, which just happened to coincide with the peak of omicron infections in the U.S. So with everyone and their niece calling in sick that week, how trustworthy are those numbers?

Both surveys basically use the same reference period for almost every month: the week that includes the 12th. Technically, the employer survey asks about pay periods that include the 12th — which could include monthly or weekly payrolls.

But what’s so special about the 12th?

If we all barbecued and drank beer on July 15, that could screw up stats like the hours we worked or how much we got paid. Using the same week every month also ensures that you can more fairly compare January to February, February to March and so on.

Because what really matters is the trend, Abraham said.

“People are understandably very focused on that new information. But I think it’s more informative to look at what the trends over a somewhat longer timeframe have been.”

If a natural disaster hits during one month’s reference week, it can mess things up a little.

In the case of omicron in mid-January? “It’s like a blizzard and a hurricane hit the U.S. all at the same time,” said Nick Bunker, an economic research director with Indeed — a Marketplace underwriter.

“They are less likely to have paid leave so that people wouldn’t show up on payrolls if they are out sick,” he said, assuming the worker is paid weekly.

But that doesn’t mean we should dismiss January’s jobs reports altogether.

Like most economists, Bunker considers the federal jobs survey the gold standard. “In a period of time where millions of people all get a contagious disease in a couple-week period, there’s going to be distortions. But it is our best high-quality measure.”

When the report comes out on Friday, Bunker said, he’ll just read it with an extra grain of salt. 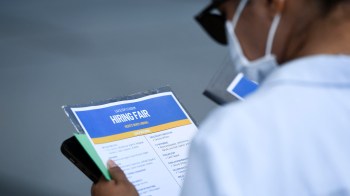