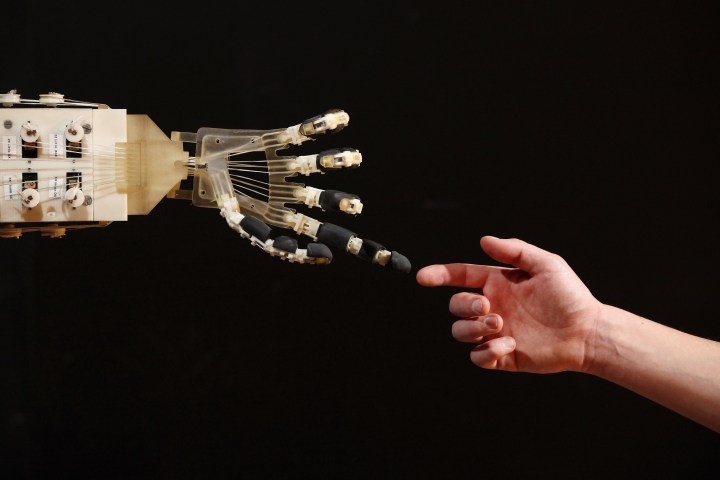 COPY
As the cost of human workers has risen, the cost of automation has fallen. Oli Scarff/Getty Images

As the cost of human workers has risen, the cost of automation has fallen. Oli Scarff/Getty Images
Listen Now

Will robots eventually replace human workers, or will they just change the nature of how we work? We on “Marketplace Morning Report” have been following this question for years, and new data suggests that automation has ballooned during the pandemic.

Charlotte Howard, the U.S. business editor and New York bureau chief for The Economist, spoke to Marketplace’s David Brancaccio about the implications of the increasingly automated American workplace. The following is an edited transcript of their conversation.

David Brancaccio: With the labor shortage a clear and present challenge for so many employers, is that changing the calculus about when a company will try to have a machine do a human’s work?

Charlotte Howard: There is data that it is starting to change that calculus, and as the cost of workers has gone up, the cost of automation has gone down. Orders of robots in the third quarter of last year surpassed their pre-pandemic record. And they were being ordered across all different kinds of sectors — it was a broader array of different kinds of companies that were placing these orders than they had in the past.

Brancaccio:  At the heart of what you’re telling me is it may be becoming more cost-effective to automate more.

Howard:  Yeah, the costs are declining. And that’s in part because the technology is becoming better and more available. It’s also because there are new business models developing. There are some companies that lease robots as a service. So rather than that huge capital investment, that a company might have to make up front — and they’re worried about maintaining the robots and repairing [them] — you can just lease a robot for an hourly rate. And it’s those kind of changes that are making this an easier decision for some companies.

Brancaccio:  Yeah, and sometimes we think of “robots” as these complicated systems of automation, but it may just be a company realizes if they put in some flat screens, they can hire fewer people.

Howard:  That’s right, there are all different kinds of automation. So you might imagine a robot in a warehouse picking something up off the shelf, but another version of automation is when you go to your local pharmacy and you check out using a kiosk; a digital mortgage closing — these are all different ways that processes are being automated. And the big debate is whether this is something that really raises total productivity and raises total employment, or whether it has a negative outcome for workers.

Brancaccio:  Because traditional economics would tell us that, yes, someone might lose a job as a checkout clerk, but somewhere in the economy, others might get hired to fix robots or to develop robots.

Howard:  That’s right. And for years, people have worried about this phenomenon that robots are going to take over and everyone’s going to be unemployed. That has not been borne out in the data. But again, there is this question of the workers who are displaced when a low-skilled job becomes performed by a robot — are they able to get the training to switch into a better job?

Brancaccio:  But every scenario suggests that there will be a lot of churn — this will be difficult for individual people, even if more jobs accrue to humans in the end.

Howard:  That’s right. And I think that politically, it can be hard to acknowledge that in a candid way because churn is uncomfortable. But I think that if you had pragmatic politicians in Washington, you would really think about how do you have a safety net that’s bouncier? When people fall out a labor force, how do you help them get back in? How do you have training that actually gives people the type of skills that employers want? Do you want to have people do all of their education and training in a lump at the beginning of their careers, or are you trying to train people continuously over the course of their life in the workforce? These are the kinds of questions that I think policymakers need to consider more seriously as automation ramps up.