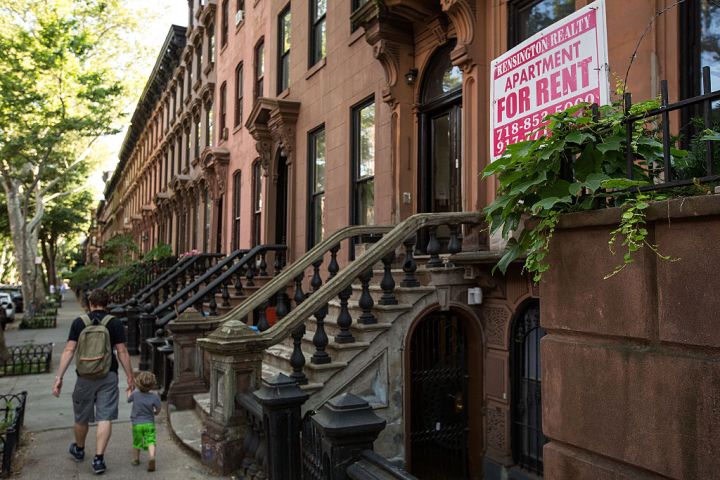 COPY
"You can find architecture critics in the early 20th century talking about how brownstones are these cheap, ticky-tacky, repetitive developments," said M. Nolan Gray. "and if you look over Brooklyn, right, there are a lot of these things, and they look all basically the same." Drew Angerer/Getty Images

"You can find architecture critics in the early 20th century talking about how brownstones are these cheap, ticky-tacky, repetitive developments," said M. Nolan Gray. "and if you look over Brooklyn, right, there are a lot of these things, and they look all basically the same." Drew Angerer/Getty Images
Listen Now

The overarching story of the housing market for the past couple of years has be the lack of supply. According to the National Association of Realtors, pending home sales fell 3.8% in December. In a statement, the association noted low supply as a factor in the decline.

Another factor could be cultural. M. Nolan Gray, a city planner and housing researcher at the University of California-Los Angeles, wrote a story in The Atlantic looking at how our love for old homes might be holding the housing market back.

“Marketplace” host Amy Scott spoke to Gray about his column. The following is a transcript of their conversation.

Amy Scott: OK, I’m just going to get this out of the way, because I’m totally guilty of this. You should see my Instagram feed. It’s a lot of preservationists. But you think that our love of old houses is a problem. Why is that?

M. Nolan Gray: Yeah, you know, I don’t think love of old houses is necessarily a problem. But I think a problem that we’re not necessarily contending with is the lack of new housing. So we do tend to give special privilege to older housing. There’s a lot of discourse about the need to preserve as much housing as possible. And we’re really only sort of coming around to recognizing the need to build a lot of new housing, and also just kind of accepting the fact that a lot of new housing is actually nicer in a lot of respects.

Scott: Nicer and, you argue, definitely a lot safer.

Gray: That’s right. New housing has a lot of underrated benefits that I think people don’t appreciate. I think it’s fashionable among a certain type of urbanist to look at all the new five-over-ones that are being built all over the country and complain about how ugly they are.

Scott: And say what a five-over-one is, for those of us who don’t have a lot of them?

Gray: So these are the, essentially, mid-rise, five-to-six-story apartment buildings. They’ll have retail on the ground floor and multifamily housing for the next few floors. People like to talk about how they’re, you know, cheap construction. Ticky-tacky. But in general, new housing actually has a lot of benefits over older housing. New housing almost never burns down. Modern fire safety codes are pretty strict. In many cases, old housing actually has accessibility issues. And this is something that new housing actually improves on and resolves. Of course, new housing is subject to things like the Americans with Disabilities Act and the Fair Housing Act. And these things require actual units that must be accommodating to people who might be in a wheelchair.

Scott: I think we’ve got to talk about aesthetics, though, because you mentioned the ticky-tackiness. There is kind of a sameness, even sometimes a flimsiness, of a lot of new construction that really turns a lot of people off. You know, the vinyl flooring, the hollow doors. Can you have affordably built housing that also looks and feels good? Is that possible?

Gray: Yeah, I sure hope so. I mean, I think one word of caution I would start out with is [that] a lot of the beloved housing typologies we have today, people at the time were saying the exact same sorts of things that people now say about those five-over-ones. You can find architecture critics, you know, in the early 20th century, talking about how brownstones are these cheap, ticky-tacky, repetitive developments. And if you look over Brooklyn, right, there are a lot of these things, and they look all basically the same.

Gray: Yeah, well, you know, when you have a mansion within a 30-minute commute of Manhattan and you’re not building a lot of new housing, of course the values are going to go up. Over time, two things happen. One is I think we develop an appreciation for crafts that might have not been noticed in their time. That could happen with some of the housing that’s being built today. But also, you know, the lower-quality stuff gets demolished and the really high-quality stuff sticks around. So we look back at past eras, and we say, wow, if only we could build like that now, when, in reality, a lot of the lower-quality housing from those eras has been demolished. And a lot of what’s left is generally of a higher quality. Of course, that’s not always true, as I argue in the piece, but I think that’s part of why we tend to assume that older housing is necessarily of a higher quality.

Scott: There’s also the environmental and climate impacts, though. I mean, you talk about how Japan tears down houses on average after just 30 years, which seems honestly wasteful and unsustainable. I mean, shouldn’t we be building homes to last longer, rather than just tearing them down every 30 years?

Gray: Yeah, that’s a great question. I mean, I think there’s a few environmental considerations with the new housing, old housing debate. The first is that the newer housing is going to be more energy efficient. If you’ve ever lived in an old home or an old apartment, you know that there are drafts, that there are leaks in the windows. If you live in an older apartment in a place like New York, in many cases, you’re dependent on a window AC unit. You know, these things have pretty significant costs. I think another element of this is, in many cases, that the fetishization of old housing prevents us from adding maybe new housing in neighborhoods where you could have taken an old single-family home and turned it into a multifamily building. And by doing that, you would have had more people in a part of the city where they can walk, where they can take transit to work, where they’re within bicycling distance of their daily needs. You know, I think that we can have a serious conversation about the climate impacts of new construction, but I think the sort of status quo of treating all new construction as an environmental cost and preserving existing homes as an environmental benefit, I think has the script flipped.