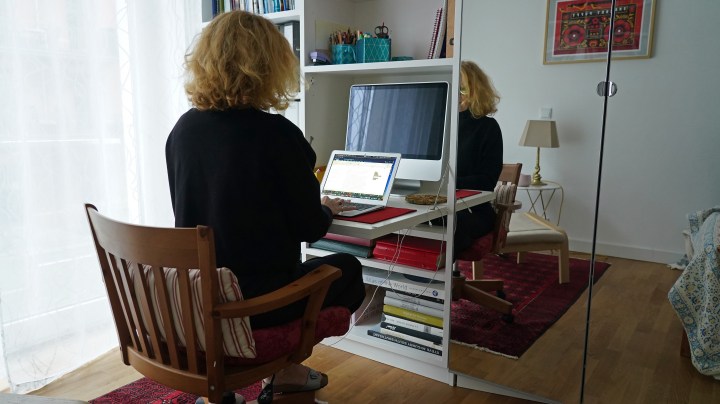 COPY
Employers may have to reconsider cutting location-based pay at a time when competition for labor is tight. Sean Gallup/Getty Images

Employers may have to reconsider cutting location-based pay at a time when competition for labor is tight. Sean Gallup/Getty Images
Listen Now

The remote work revolution has made it possible for more workers to reconsider where they want to live — perhaps giving up expensive cities like New York or San Francisco for more affordable ones like Austin or Boise. Many employers have embraced the idea of working from anywhere, but some — including big names in tech like Google, Facebook, Twitter and Microsoft — have indicated a move could come with lower pay.

Such policies are common and longstanding among large national corporations, according to Johnny C. Taylor Jr., president and CEO of the Society for Human Resource Management.

“Where the work is done has for a very, very long time dictated salary,” he said, noting he has experienced such a cost of living adjustment.

About a decade ago, he transferred from New York City to Charlotte, North Carolina, while working for digital media holding company IAC.

Pay cut vs. quality of life

A pay cut, under any circumstances, can feel punitive and unfair

“It would make me feel bad,” said Stephen Boatright, who works as a video editor for Scale Media, a wellness branding and e-commerce startup.

Last fall, Boatright and his fiancee moved from Los Angeles, where his employer is based, to his hometown of Savannah, Georgia, exchanging a cramped, one-bedroom apartment for a three-bedroom house with a backyard on a quiet street lined with century-old oak trees.

“The money goes further, and there’s absolutely a mental health comfort in knowing that we’re not having to stretch every dollar,” Boatright said.

Though his living expenses have dropped by about one-third, Boatright’s employer agreed to keep his salary the same.

“They were very open to it,” he said. “If I’m achieving my deliverables and there’s not a detriment to the work or the company based on my location, then I feel like my value to the company is consistent.” After all, he pointed out, an employer wouldn’t adjust someone’s salary based on other personal expenses — like what kind of car they drive or the clothes they buy.

So what are employers paying for when they pay a premium based on location?

“Most of the time, we think higher wages have to be a sign of higher productivity,” said Edward Glaeser, a Harvard University economist and co-author of “Survival of the City: Living and Thriving in an Age of Isolation.”

Glaeser said location-based pay is traditionally seen as a reflection of the productivity gains of agglomeration — the physical clustering of industries like finance in New York City or technology in Silicon Valley.

Glaeser said regions that concentrate talent tend to be more innovative, producing more patents and spurring more new businesses, thanks to the interactions and competition that happen in proximity.

The question now, given the widespread experiment in remote work, is whether proximity must be physical or whether similar gains can be made virtually.

“It’s just very hard to tell,” said economist William Wheaton at the Massachusetts Institute of Technology. “Productivity is very difficult to measure. You can’t just strap a meter on a worker and say, ‘How productive are you?'” That’s because the productivity gains of agglomeration happen at a population — rather than individual — level.

In some ways, Wheaton said, remote work has made it easier to exchange ideas with a broader array of people from all over the world, not just one company or metropolitan area.

“Would it be a better brainstorm if we were sitting across the table with a cup of coffee or a drink? That’s a really big question,” he said.

Wages in a tight labor market

“I think there’s a difference between practice and theory,” said Cali Williams Yost, a business advisor and founder of Flex+Strategy Group.

After nearly two years, remote work and flexibility have become the baseline for many workers, and competition for labor is almost universally tight.

“You can try to pay less, but there’s probably going to be somebody right behind you that will say, ‘You can work remotely and I’ll pay you your full salary,'” Yost said.

Maintaining pay for a worker who moves could be a cost-effective way to boost employee satisfaction at a time when turnover is high and wages are rising.

Boatright in Georgia said he feels grateful to his employer for facilitating what he calls “a massive improvement” in his quality of life.

He and his fiancee are finally able to save toward buying a home, they’ve been able to travel more and Boatright finally has the funds and space to devote to a new hobby — making puppets.

His first effort is a fuzzy blue character with a goofy grin and a top hat named Duke Miles.

Boatright is now working to perfect the character’s voice, with some inspiration from the place he now calls home.

“He’s definitely smoked way too many cigarettes, and he’s from the South,” he said.