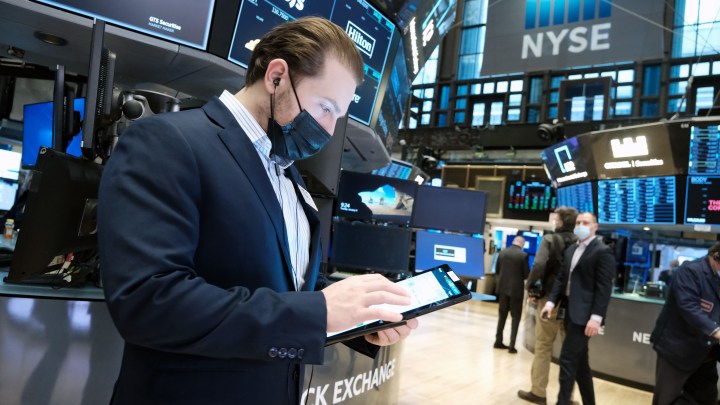 COPY
2021 was a huge year for public stock offerings. But 2022? Maybe not. That could affect venture capital, government budgets and the housing market. Spencer Platt via Getty Images

2021 was a huge year for public stock offerings. But 2022? Maybe not. That could affect venture capital, government budgets and the housing market. Spencer Platt via Getty Images
Listen Now

2022 has seen its first big initial public stock offering: Private equity firm TPG raised about $1 billion ahead of its debut on the Nasdaq on Thursday.

Last year was an IPO bonanza, with a record number of companies raising a record amount of capital.

But investors may not be as welcoming to new listings this year — the software maker Justworks already postponed its offering because of rocky market conditions. And a less frothy IPO market will have ripples far beyond Wall Street.

“The less great your IPO might look, the more appealing getting acquired by a massive company can be,” said Sarah Kunst, general partner at Cleo Capital, a venture firm.

Later-stage startups may be more inclined to join the Metas and Amazons of the world if public markets aren’t so welcoming, according to Kunst.

With so much of startup employees’ pay tied up in stock options, founders may have to go above and beyond free kombucha to keep staff. They may have to sell the company. “As it takes longer to IPO, founders have to get creative to think about how to keep their employees well-compensated and happy,” Kunst said.

An IPO drought taxes more than just Silicon Valley, though — it affects taxes.

“Places that are highly reliant on income taxes and that have a lot of IPOs, their revenues can go up and down a lot based on what’s going on with IPOs,” said Kim Rueben, a public finance researcher at the Urban-Brookings Tax Policy Center.

While some state and federal coffers could take a hit, a dull IPO market could help one long-suffering group: first-time homebuyers.

“On the date that the firm that’s intended to do an IPO files its intention, we actually see a big increase in house prices,” said Barney Hartman-Glaser, a finance professor with the Anderson School of Management at the University of California, Los Angeles.