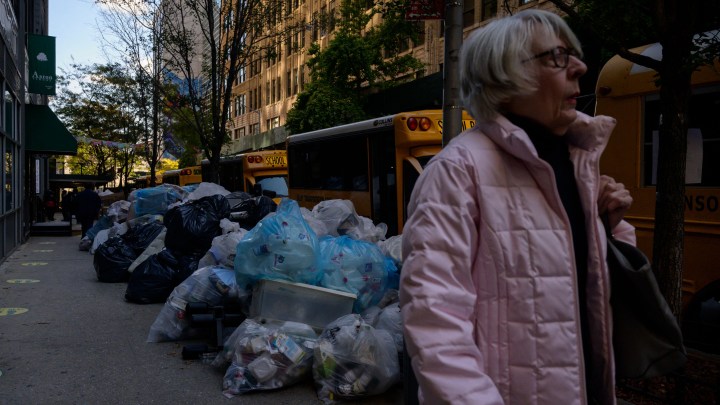 COPY
Cities across the country are seeing trash pile up as omicron spreads. Ed Jones/AFP via Getty Images

Cities across the country are seeing trash pile up as omicron spreads. Ed Jones/AFP via Getty Images
Listen Now

The omicron variant of the coronavirus is keeping a lot of people home and causing worker shortages across the economy, including what’s called the sanitation sector, or garbage collection.

Public works departments and private garbage disposal companies around the country are short staffed. And in some cities, maybe even your own, that means trash and recycling bins are sitting on the curb long after their usual pickup time.

Omicron started sending workers home, which meant some trash and a lot of recycling wasn’t getting picked up, she said. Now, workers are returning from quarantine, and the city has approved a salary boost to attract new garbage truck drivers.

“But it’s been an intensive, challenging time,” Ripley said.

And that’s not just in Tempe. Residents of Atlanta, Philadelphia and Miami are among those dealing with collection delays.

“The combination of increased residential waste during the holidays and the omicron variant is a perfect storm for solid waste collection,” he said.

Sanitation is having a hard time hiring. Plus, there’s been a sharp increase of household trash “because people stopped going to stores and started buying everything on e-commerce.”

While we’ve come to expect staff shortages at retail stores and restaurants, Biderman said delayed trash collection gets our attention.

“When it’s not done properly and trash blows all over the street, it immediately affects the quality of life for people in communities,” Biderman said.

“The COVID crisis has lifted the sanitation worker into the public consciousness. It’s seen as vital labor,” he said.

Since the pandemic began, Ryan said many sanitation workers have been bargaining for better pay and working conditions.

Take San Diego: There, it’s a labor strike — not omicron — behind the current trash collection backlog.