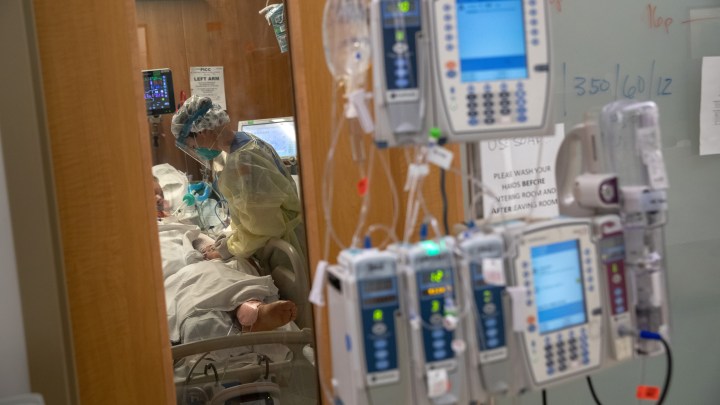 COPY
A nurse tends to a COVID-19 patient in a Connecticut ICU in April 2020. Understaffing and pandemic stressors have prompted many nurses to consider leaving the field. John Moore via Getty Images
Quitting Time

A nurse tends to a COVID-19 patient in a Connecticut ICU in April 2020. Understaffing and pandemic stressors have prompted many nurses to consider leaving the field. John Moore via Getty Images
Listen Now

Across the country, nurses are quitting their jobs in record numbers. A September survey by the American Association of Critical Care Nurses found that two-thirds of nurses surveyed have considered leaving the field because of the pandemic.

Peter Sidhu, a registered nurse who worked in the ICU per diem at Kaiser Permanente Woodland Hills Medical Center during several of the region’s COVID-19 surges, said understaffing made him decide to leave the bedside in April. He’d spent nearly two decades in the field. He’s now the state treasurer of UNAC/UHCP, a union that represents health care workers.

“The reason that I left the bedside was that I was tired. I was having panic attacks. I was anxious,” Sidhu said in an interview with Marketplace’s David Brancaccio. “Just looking around and seeing the distress really destroyed me inside.”

David Brancaccio: Was this a clear-cut decision in the spring for you to leave, or were you conflicted?

Peter Sidhu: I struggled. It was a very tough decision for me. And I would have to say, the reason that I left the bedside was that I was tired. I was having panic attacks. I was anxious. Every time I would wake up and know that I had to go to work that night, I would start thinking to myself, “All right, prepare yourself: you’re going to not have enough staff; you probably won’t get to eat; you may not even get to use the restroom, and you’re going to see several people die.” And that’s a lot to take on.

Brancaccio: You’re describing almost a wartime experience, right? I mean, this intense pressure that people in the health care field remain under. And by last spring, with another [COVID] surge happening, that was your life.

Sidhu: It was. When COVID first hit, I’m like, “OK, here we go, go time. This is going to be our moment to step in and do what we were trained to do.” And I think that everybody stepped up. But the lack of change in the infrastructure; the lack of hiring, kind of led to that burn. The first wave — I perfectly understand why we were in the crisis that we were in. And the second one hit us a little bit worse, and we were still recovering. But I don’t think that there were any excuses for us not to be prepared for that third one.

Brancaccio:  Yeah, I mean, when you think of it as a matter of policy, it gets to the notion of are there enough resources. But at the personal level, it’s probably that you were overworked. I can’t even imagine the hours you were being asked to put in.

Sidhu: And the hard part about it is that, when one of your co-workers calls you and says, “Hey, can you just come in and help us for a few hours? I haven’t had a lunch break,” you know what that feels like. And so that’s where you’ll see frontline workers working additional shifts, working on their days off, and at the risk of putting their families at risk. Because when you go in, there’s no guarantee that you’re not going to catch something. As careful as you are, when you’re taking care of more patients than you’re supposed to — so, for example, in the ICU, you’re supposed to have a maximum of 2:1 [patient-to-nurse ratio]. And we saw areas where there were 7:1, 9:1, 11:1 — you make mistakes.

Brancaccio: So you’re now doing work for the union that represents nurses. The pay can’t be as good. I mean, you may find the work rewarding, but is it really as good of a job at that level?

Sidhu: I would say that you’re not becoming a union officer or a steward because of the pay. It’s because you want to do the right thing.

Brancaccio: Yeah, and you raise this issue — when you’re a nurse during one of the several surges of this pandemic, you were losing patients around you. You had to see people pass away. And at least in the union work, hopefully not.

Sidhu: Yeah. There’s one defining moment in my career that really made me make the decision on leaving the bedside. I’d gone into the hospital to actually see a co-worker that had been admitted. I walked in, and there were several codes happening in our primary ICU, there were codes happening in our secondary ICU, and nobody in our third ICU had had any breaks. And one of my co-workers just looked at me and said, “Can you help?” They threw me some scrubs and I worked for the next four hours, and during those four hours, we had several patients pass away. And just looking around and seeing the distress really destroyed me inside. So that’s when I internally made that decision that this just wasn’t the place for me. 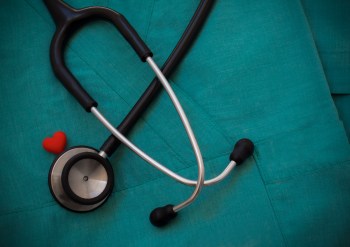