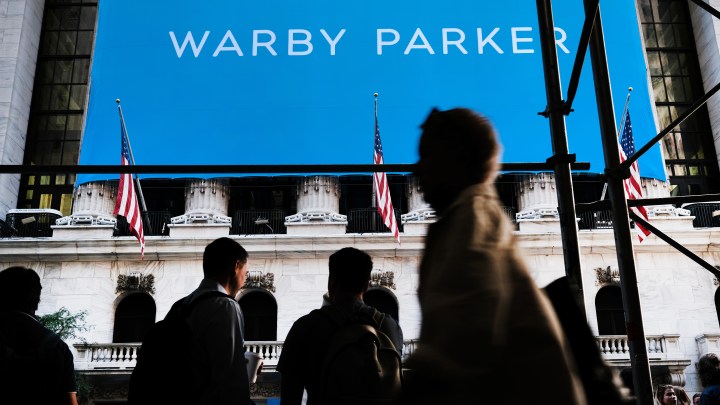 COPY
People walk by the New York Stock Exchange as Warby Parker makes its debut on the stock market on Sept. 29. Spencer Platt via Getty Images

Just before the pandemic, in 2019, most Warby Parker revenue was coming from in-person sales. Then, thanks to the lockdowns of 2020, that flipped and online sales boomed.

Now, it’s about 50-50. And hybrid shoppers are who you want, according to Melissa Gonzalez, CEO of Lion’esque Group.

Warby Parker is feeling confident, too, and plans to keep expanding in-person locations. But that’s risky, said, Forrester analyst Sucharita Kodali, given how the pandemic shut down retail stores in 2020 — including all 150 Warby Parkers.

“Half of the retail world thinks that they will go back to where they were and, you know, kind of it will. They’ll be able to resume their old glory. The other half, you know, believes that the kind of the store is dead and doomed,” Kodali said.

Plus, Warby Parker has inspired their own competition, and Kodali said future company leaders will have to contend with that.

“What they are going to inherit is a brand that is a nice brand, but a brand in an incredibly challenged space … with a really fickle customer,” she said.

The direct-to-consumer customers are often younger and not particularly brand loyal, she said. On top of that, the now-public company has a bigger profile to maintain.