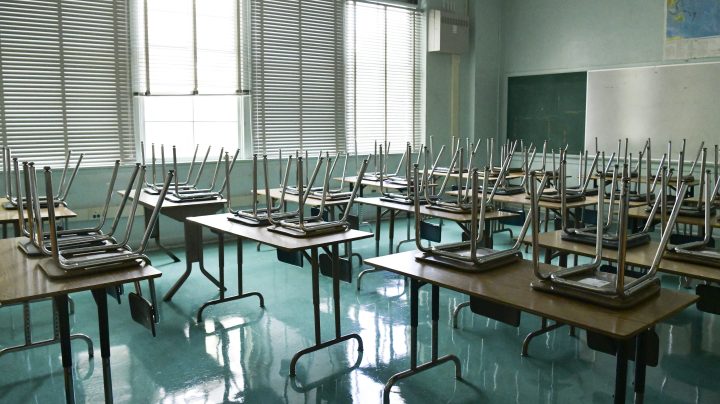 COPY
"If it was more financially rewarding, I might stay in it," Catherine Fink says of teaching. Rodin Eckenroth via Getty Images
My Economy

"If it was more financially rewarding, I might stay in it," Catherine Fink says of teaching. Rodin Eckenroth via Getty Images
Listen Now

As the school year kicks off, districts across the country are facing teacher shortages. A survey from the National Education Association found that 32% of respondents plan on leaving teaching earlier than they anticipated because of the pandemic.

Catherine Fink is a high school English teacher in Longmont, Colorado, who has been an educator for 18 years. This year, in addition to teaching at her school, she’ll also be taking courses as a first-year law student.

“I went into teaching because teachers were the happiest people I knew,” Fink said. “Come to find out when you’re actually a teacher, a lot of teaching behind the scenes is really hard and the burnout factor is real.”

She’d been considering leaving education for a long time and said teaching from home during the pandemic likely accelerated her decision.

“I really think that if it was more financially rewarding, I might stay in it,” Fink said. “I hate saying that. I don’t want to be the kind of person who just thinks about money, but with three kids to put through college and just to survive in today’s world, I just wish that people respected teachers enough to pay us what we’re worth.” Teachers in Colorado are among the lowest paid in the country.

Fink is a few weeks into a four-year law program. She received a scholarship that pays for about three-quarters of her tuition.

“If I just look at the numbers, we’re still going to be short about $1,000 a month, but I’m going to do the student loan thing again,” Fink said. “The kids are offering to have a lemonade stand. My son wants to sell the origami that he makes, so everybody is pitching in, and I think we’ll be OK.”

This year, Fink has reduced her full-time teaching load to 80% and plans to continue teaching while taking her law classes. Students are only required to go on campus for in-person classes two weekends a month, and the rest of the work is done online.

“My goal right now is to get up at 5 and exercise, get ready for the school day and teach,” Fink said. “Then [I’ll] use my planning periods to do all my schoolwork at school, which I’ve never accomplished before. But I’m bound and determined to do it this year so that when I go home, I can put in a couple of hours of law school work before the kids get home.”

She expects the hardest part of managing this year as both a student and a teacher will be spending less time at home with her kids.

“Hopefully they will look back and realize that although we had time when we were missing each other or we were apart, that I’m someone they can be proud of and look up to.”