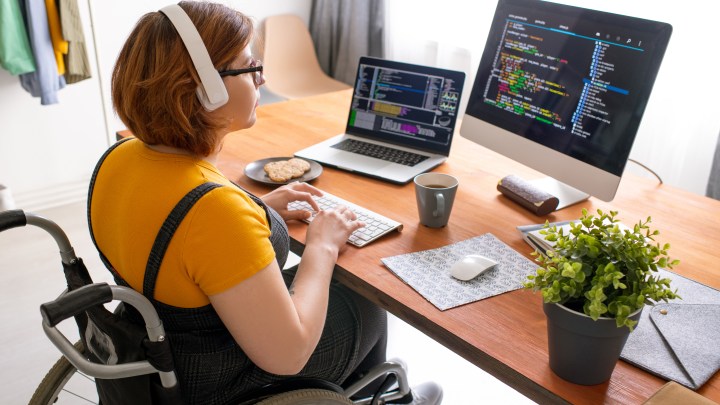 COPY
Working from home has proved liberating for many workers with disabilities, and many hope the flexibility of work during the pandemic have staying power. shironosov via Getty Images

Working from home has proved liberating for many workers with disabilities, and many hope the flexibility of work during the pandemic have staying power. shironosov via Getty Images
Listen Now

Before the pandemic, Britney Wilson’s daily commute from Brooklyn to Manhattan took her two hours. She has cerebral palsy, and uses arm crutches and a motorized scooter to get around. Her subway stop isn’t accessible, and she has to specially arrange to take a paratransit bus. Just this week, she did the commute again for the first time in nearly two years. She said it was an annoying reality check.

More than 61 million Americans live with disabilities, and many of them have been asking for more flexible work arrangements for decades. Now, as employers contemplate a return to the office, and re-think workplaces, there’s an opportunity to make offices, both virtual and in-person, more accessible.

“We don’t want a ‘back to normal.’ Normal was never enough,” said Maria Town, president and CEO of the American Association of People with Disabilities. “I hope that employers are really examining what has worked well during this period of time, and how to continue that.”

Britney Wilson, with the long commute, is director of the Civil Rights and Disability Justice Clinic at New York Law School. She said she likes being there with her students in person, and also likes that she has a flexible schedule, where she’ll be able to work from home sometimes.

The technology companies have adopted to enable remote work has also benefited many people with disabilities. Moeena Das, the chief of staff at the National Organization on Disability, is deaf. Prior to the pandemic, if she was in a meeting, a stenographer also joined to transcribe what people were saying. That took some advance planning. Now, Das uses automatic captioning in Zoom, meaning she can jump on last-minute calls.

“It’s been really incredibly liberating to be in any context and say, ‘Yep, I can hop right in,'” Das said.

Das, who also lip reads, says it’s also good to think about how in-person office policies, such as mask mandates, will affect people with disabilities.

One concern is that more virtual interactions will make disabilities less visible in the workplace, said Maria Town of the American Association of People with Disabilities.

“During the pandemic, because people only see me from the bust up, I have to be more explicit about my disability in different ways than I would in an in-person environment,” said Town, who has cerebral palsy.

Town is concerned that remote work, which she believes should definitely be an option, will become the default for disabled people, especially those who require more involved accommodations in the workplace.

“Our motivation and commitment to actually making our physical environments and in-person interactions accessible will be reduced,” said Town.

Given everything we’ve learned during the pandemic, employers have a great opportunity to hire more disabled workers. Of the working-age population, only about 30% of disabled Americans are employed.

“Getting back to pre pandemic levels is not enough,” said Taryn Williams, assistant Secretary for Disability Employment Policy at the US Department of Labor.

Plus, employers are missing out on a ton of talent.

“I say all the time, we’re the ultimate innovators,” said Wilson of New York Law School. “Our whole lives are about figuring out how to adjust and to do things, even when they’re not set up for us to do so.”