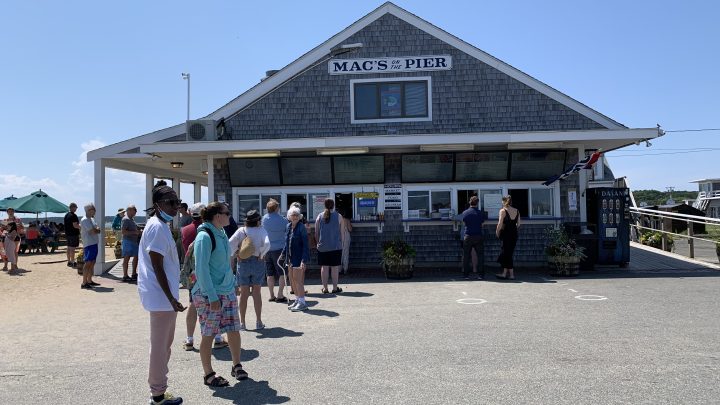 COPY
At Mac’s on the Pier in Wellfleet, waiting in line has always been part of the experience. But according to the owner, waits have peaked from an hour and a half to five hours this summer. Samantha Fields

At Mac’s on the Pier in Wellfleet, waiting in line has always been part of the experience. But according to the owner, waits have peaked from an hour and a half to five hours this summer. Samantha Fields
Listen Now

During the summer on Cape Cod, pretty much everything is open seven days a week.

This year, though, Noble had to break the rule, and keep one of his shops, in Wellfleet, Massachusetts, closed one day a week — because he couldn’t find enough staff.

“That’s the first time that’s ever happened in the history of our business,” he said.

It’s happening to a lot of businesses on the Cape this summer. Many are closed one or two days a week or have limited hours; a few didn’t open at all.

And there are “help wanted” signs everywhere.

“I think maybe we had a false sense of hope and expectation that after 2020 it would be smooth sailing,” said Tracey Barry-Hunt, who owns a restaurant called Winslow’s Tavern in downtown Wellfleet. “And it’s still challenging.”

Finding enough waitstaff and kitchen staff has been one of the biggest challenges for Winslow’s this summer, but it’s not the only one.

“The supply chain is huge,” Barry-Hunt said. “Food costs are up significantly. We have a major vendor who just completely pulled the plug. They don’t have delivery out here. They don’t have the drivers.”

Some also don’t understand why Winslow’s isn’t doing an oyster happy hour every day anymore, from 3 p.m. to 5 p.m.

“It’s a beautiful day, why can’t I get oysters right now? Well, the bartender’s on a break. We’re not doing it this year,” Barry-Hunt said. “Customers are noticing that we’re not serving until 9:30 p.m. And why? Why can’t I have dinner at 9:30 p.m.?”

Almost every restaurant and business, it seems, is understaffed this year. At the same time, there are more tourists on the Cape than ever.

At the Cape View Motel in Truro, “this is the first year we have had less than 2% [vacancy] for the entire summer,” said Mac Hay, who owns Mac’s Seafood, which includes the motel and a bunch of fish markets and restaurants.

At Mac’s on the Pier, a clam shack on the harbor in Wellfleet, waiting in line has always been part of the experience.

It’s so busy so often at all five of Hay’s restaurants these days that there comes a point pretty much every night where they just have to cut off take out orders online and stop answering the phone — something that used to happen maybe once or twice a year.

“It’s really a rare phenomenon that we’re going through,” Hay said. “And it’s good in some ways, but it’s also incredibly stressful in other ways.”

Customers, for the most part, have been great — patient, understanding, aware of at least some of the challenges restaurants are up against this year.

“I get asked probably 40 to 50 times a day how things are going,” Hay said. “And they all want to know, ‘How is the staffing issue?’ And I say, ‘We’re in great shape, where we have just enough workers.’ But just enough is not enough.”

It’s also just enough for now. A lot of those workers are college students and high school students who will be heading back to school in a few weeks.

And if this fall is anything like last fall on the Cape, the tourists will keep coming.