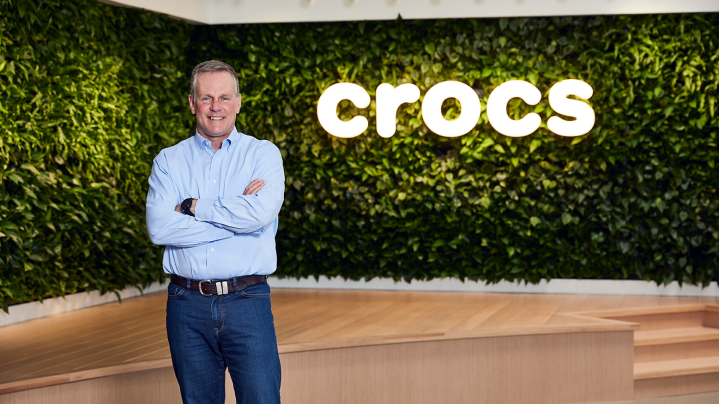 Consumer spending is propelling economic recovery, rising 2.8% in the second quarter. Although the U.S. saw strong increases in spending on services, goods spending remained healthy, too.

Crocs, the maker of the cushioned clogs of the same name, seems to be benefiting from the increase. In the company’s second quarter, the company’s revenue increased by 93%, to $641 million, continuing growth that accelerated during the pandemic.

In recent years, Crocs have gone from uncool to mainstream. “Marketplace” host Kai Ryssdal sat down with Andrew Rees, CEO of Crocs, to discuss that shift. The following is an edited transcript of their conversation.

Kai Ryssdal: So, what gives? Have you guys gotten lucky the past year and a half? Or is there something else going on here?

Andrew Rees: Everything involves a bit of luck, yes. So, I think we’ve gotten a bit lucky, but we’ve also been working really hard at this. Crocs has been a brand that’s been in a turnaround for some period of time that involved, you know, repositioning our product and marketing and really growing the business. On top of that, we’ve really managed to ignite the brand and make it more and more relevant with a younger, passionate consumer. And we’re growing at a breakneck pace.

Ryssdal: Talk to me about that turnaround for a second. Because — you, of all people, but certainly anybody who’s seen Crocs over the past decade, two decades — they were hot, crazy hot for a long time, then they kind of fizzled, and now they’re back. How do you manage a company through that? What do you do?

Rees: Yeah, so I joined the company in 2014, which probably was one of the more recent troughs. I think the company is a very young company and really had failed to put in place a lot of sort of basic infrastructure about how you run a global brand. When I joined, we set about putting that infrastructure in place with the right team. We have an incredible team today with seasoned industry professionals, the right business processes around product development, around supply chain, and then really focusing on our consumer. We targeted what we call a young explorer-consumer. She’s urban, she’s fashion-conscious. She’s global in nature.

Ryssdal: She’s a she? I’m assuming the pronoun is intentional?

Rees: The pronoun is intentional. They are also male, right? So, they’re young consumers, but there’s definitely a bias towards females. They’re on social media. We never had a brand awareness problem. Everybody knows who Crocs is, you know? You may love it, you may hate it, but you know who it is, right?

Ryssdal: That’s actually a good question, right? Do you care whether people hate it? I mean, the only bad publicity is no publicity, right?

Rees: That is almost correct, yes. So, look, we don’t want to have publicity about something the company does that’s inappropriate. But we don’t mind some consumers hating the brand, right? The bifurcated nature of the brand, the ability for some people to hate it and some people to love it is just super important.

Ryssdal: Are you benefiting from the pandemic-induced — but already in progress — casualization of American dress, do you think?

Rees: Yeah, we are absolutely benefiting from casualization. And you said it well, which is the pandemic has helped to accelerate it, but it’s been going on for some time. Just look at the broader footwear industry. The penetration of sneakers and athletic wear in the industry has grown dramatically over a 20-year period. And it’s grown because they’re, frankly, way more comfortable, way more versatile than a pair of, you know, black leather dress shoes.

Ryssdal: Does it bother you at all that — and I don’t know, I’ll just own it, [it’s] uninformed speculation — but I bet you if you stopped, you know, 10 people on the streets of Manhattan or any town in the United States, and said, “What are Crocs?” They would say, “Oh, they’re those clog things.” Does it bother you that you have different product lines, but probably not too many people know about them?

Rees: No, it doesn’t bother me. That’s an opportunity. You know, I think if you have a core iconic product, that’s a reason for people to know who you are. And as we talked about love you or hate you, right? That puts you in the conversation. If you’re in the conversation, then you have a better than fighting chance to tell them about all the other things you do. So, we just launched socks this week. So, you know, Crocs and socks have been a thing for many years. We hadn’t had our own range of socks. That’s a huge opportunity.

Ryssdal: What took you so long on the socks? I mean, come on.

Rees: Well, we wanted to get it right. We wanted to do something that was different in the marketplace and approachable. But yeah, that’s a good call. Could or should we have done it faster? Maybe.

Ryssdal: On that point of Crocs being more comfortable than, you know, black leather business shoes, or what have you. As it happens, I’m wearing a pair of black leather business shoes right now. And even though this is public radio, if I were to show up in the newsroom tomorrow wearing a pair of Crocs, people would look at me like I had three heads, you know?

Rees: I don’t know maybe that’s your own preconceived notion Kai, right? I think they may look at you and think you were smart. You’re walking your own path and you were really confident about your fashion choices. So, I might think about that a different way.