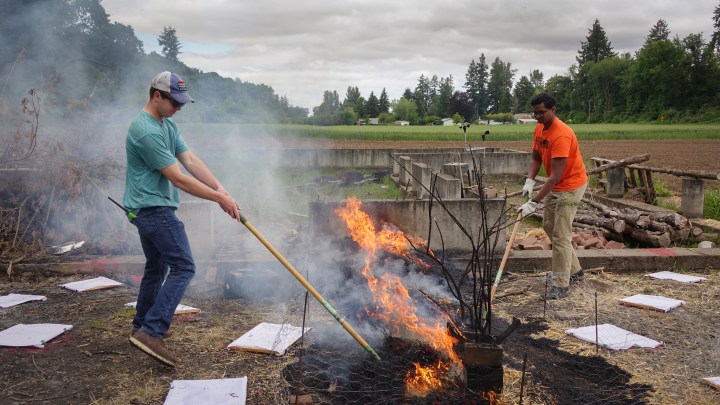 COPY
Student Will Heffernan (left) and researcher Sampath Adusumilli clear debris around a burned chamise branch during an experiment measuring the embers produced by vegetation. Jes Burns/OPB
A Warmer World

A rooster might be the last thing you’d expect to hear when there’s a scientific experiment underway, but at David Blunck’s farm near Albany, Oregon, the soundtrack is positively pastoral.

His roosters crow, his dog barks, birds fill the air with their song. Soon, those sounds will be joined by the crackling of a fire.

In a small clearing next to a freshly planted field of vegetables tended by Blunck’s kids, the Oregon State University engineer and his team are setting out frames of white, fireproof cloth. They’re spaced on the ground in growing semicircles, like lawn chairs at an outdoor concert.

“For how much of a tree or shrub burns, what’s the number of firebrands that’ll be released? That’s the big value we’re trying to back out,” Blunck says.

The cloth is there to catch those firebrands — or flying embers — when they land.

Once wildfires start, one of the ways they spread is through firebrands blowing into unburned areas. Despite their importance, relatively little is known about how many firebrands different kinds of vegetation generate during wildfires.

“If you want to understand how to control [a wildfire] or contain it or prevent it, it’s helpful to know how it spreads,” Blunck says.

To do this, he is taking a vicarious tour of Oregon — by burning some of the state’s most prominent trees and shrubs. His team has already burned ponderosa pine, grand fir, Douglas fir, juniper and sagebrush in experiments.

On this day, they’re burning chamise — a shrub that’s common in chaparral ecosystems, which are found in southern Oregon and California.

The experiment itself is pretty straightforward.

Engineer Sampath Adusumilli, who’s leading the day’s burns, works with OSU student Will Heffernan to weigh the branches they’re going to ignite. They use bricks to prop them upright at the focal point of cloth frames, then spread straw at the base to emulate flammable ground cover.

Adusumilli drops a few pieces of the straw into the breeze and watches its behavior.

“This is our scientific wind-direction testing,” he says, keeping an eye on a wind gauge nearby. “We don’t want more than 1 meter per second, so we’re trying to hit that sweet spot.”

The straw drifts toward the cloth frames on the ground, and it’s go time.

Heffernan uses a barbecue lighter to set fire to the straw, and the flames start to creep toward the chamise.

Suddenly, the bushy branch goes up like a torch, sending swirling threads of firebrands up into the heat-distorted air. Then, almost as quickly as the experimental burn started, the fire dies.

“It’s just smoldering like a cigarette,” Blunck says, examining the glowing, ashy tip of a branch.

Adusumilli weighs the black, skeletal branches that remain to figure out how much of the chamise burned.

“If the fire intensity was higher, I think the whole thing would disappear,” Adusumilli says. “If you look at pictures of chaparral landscape after fire has gone through, it’s just barren. There’s nothing left.”

Embers have fallen onto the cloth frames, leaving scorch marks behind. Blunck says each mark will be counted and used to determine how many firebrands were produced per kilogram of material that burned.

“Now, because we have a number of firebrands per mass that’s burned, that gives the way we could compare between different species,” he says.

In an actual wildfire, knowing how many firebrands are being produced could eventually help firefighters understand how the fire will behave.

“When the embers are approaching the surface … those are the embers that are responsible for potential ignition of something,” said Jiann Yang, an engineer with the National Institute of Standards and Technology’s Wildland-Urban Interface Fire Group.

NIST is a federal laboratory that partially funds Blunck’s research with a $200,000 grant.

Yang said figuring out something as fundamental and straightforward as how many embers touch down is useful.

Ignition “depends on how many embers land on the surface, and it depends on the characteristics of the fuel,” he said. “If an ember lands on mulch, if the mulch is very moist, you’re not going to ignite the mulch. But if you have a lot of embers, you probably still can.”

But moving into the wildland-urban interface is where the real value could come.

“It’s just not how fire spreads through the forest, but it’s what happens when it gets into the community,” Yang said.

Blunck’s findings feed directly into this. They could bolster fire-prediction models that help communities plan for wildfires.

“We can use [the models] without ever having to burn anything,” Blunck says. “So you could say, ‘I want to put some trees or I want to put a house on this location. Where do the firebrands go, and what’s the likelihood they’ll start a new fire?’”

And because Blunck and his team are burning different-sized trees, they’re able to start to compare how tree age affects how many firebrands are generated.

Some of their preliminary findings have been unexpected. The early data suggests that for each kilogram burned, larger trees produce fewer firebrands than smaller ones.

“We’re scratching our heads about that one,” he says. “We’re not sure if those trees happen to have more moisture content. Or maybe the structure of the tree — maybe there’s just fewer of the fine twigs or needles to break off.”

As climate change brings longer, drier summers to the West, state leaders and forest managers are wondering, how do we best prepare communities for the increasing risk of wildfire?

Blunck says once they finish burning forest fuels to determine firebrand production, he wants to dig even deeper into how fires spread in communities.