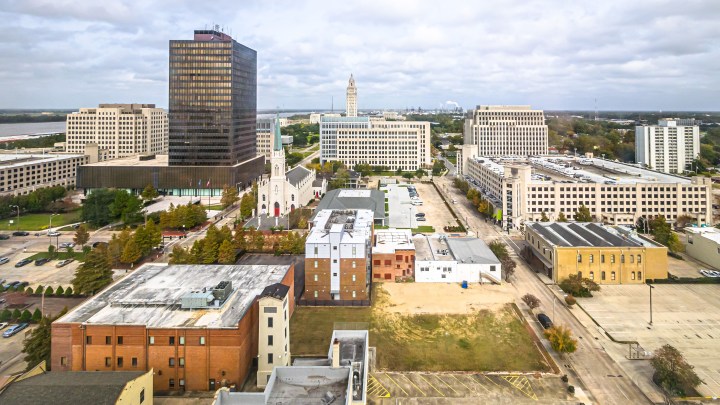 We know by now that President Biden and congressional Democrats believe funding America’s crumbling infrastructure should be one of Congress’s priorities. The administration’s infrastructure and urban renewal proposals have sparked conversations about equity.

Urban renewal projects have a history of marginalization. In the 20th century, federal policies like the Housing Act of 1949 forced poor people and people of color out of their homes, leading to a cycle of poverty — including higher unemployment, poorer health and lower academic achievement — that continues today.

Christopher Tyson, president and CEO of Build Baton Rouge, thinks cities should use development authorities as an engine for equity and change. As Tyson wrote in a recent article for Bloomberg, he believes the public sector has a responsibility to build better cities that follow the needs and wants of the residents who live there, rather than of private developers.

“Marketplace” host Kai Ryssdal spoke with Tyson about that vision. The following is an edited transcript of their conversation.

Christopher Tyson: We know the history of redevelopment authorities and other kinds of large-scale, government-led urban renewal plans and cities has been a disastrous one. Indeed, the problems that I wake up every day and try to design strategies out of are the ones that previous iterations of urban policy created. What that means is that we must have an equity focus, we must have an equity lens. We have to realize we need a robust and well equipped public sector to partner with private investment, to partner with communities and to partner with others to make sure that everyone is included in the future city.

Kai Ryssdal: So, when you go around and you have these meetings, or you’re talking to folks on the street when you’re passing by or whatever, do they trust you? Or are they justifiably jaded by experience?

Tyson: Both. And, you know, I’ll tell you, Kai, when I first encountered someone when I took over this role, and I told him that I was going to be taking over the city’s redevelopment authority, the gentleman happened to be Black, and I was meeting him through a mutual friend. He kind of rared back and said, “Should I be concerned?” And I said, “Absolutely.” And what I meant by that is that I want the community to lean in. I want them to understand the policies and the politics and the finance and the aspects of what is happening in their communities, both how things became so blighted and so dysfunctional, and how we fix that.

Tyson: No, I worry that in the absence of a robust public role, that we will leave these issues of affordable housing, of infrastructure like mass transit, and coordinating that with other development, that we will leave it to a private investment, which obviously has to make a profit, which has to manage risk — and those risks can be steep. And so we can often design communities for condominiums and coffee houses as opposed to childcare centers and community health centers and fresh markets or grocery stores. And when you’re trying to attract those needs that communities desperately want, there will be a financing gap, right? There will be considerable risk. And private investment is not going to swoop in to put a headstart center in. A community needs childcare, and they need it on the transit line. And they need it adjacent to or in close proximity to quality, affordable housing and park space and sidewalks, and I can go on. But in the absence of that overarching plan and vision, I have very little hope that you will see a change that actually benefits the people who live there.

Ryssdal: Well, it occurs to me, actually, that what you’re talking about isn’t urban renewal so much and infrastructure only in the most, you know, the theoretical sense. What you’re really talking about is building a community around what the people who live in that community need.

Tyson: Yes, absolutely. And when we think about organizations like mine, and again I always say “equity-focused,” because this is not your grandfather’s urban renewal, right? This is a 21st-century approach that is racially conscious, that is justice-focused, that is rooted in history. And so that is what I see organizations like mine being able to do. And I think when you look around the country, at organizations like ours, you’ll see in the best cases, that equity is being centered in the work.