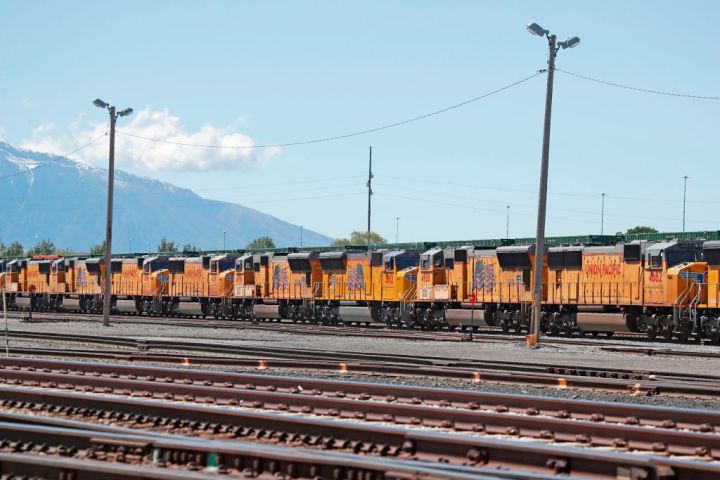 COPY
Idle Union Pacific engines sit in rows at a train yard in Salt Lake City in June 2020. Utah was one of the few states that didn't have to lock down as much as other states during the pandemic. George Frey/AFP via Getty Images

Idle Union Pacific engines sit in rows at a train yard in Salt Lake City in June 2020. Utah was one of the few states that didn't have to lock down as much as other states during the pandemic. George Frey/AFP via Getty Images
Listen Now

Jobless claims in the United States rose last week by 2,000, the Labor Department reported Thursday. Not ideal, but still near pandemic lows. Mash that together with the latest jobs report and things are looking optimistic overall. But zoom in on a state-by-state level and the jobs recovery in this economy looks uneven.

Before we get too far into this, let’s flag that an uneven, state-by-state economic reality is normal, even in good times. In 2019, the difference between the lowest and highest state unemployment rates was just over 3 percentage points. Now it’s about 5.5 percentage points.

“It’s important to remember that states vary for a lot of reasons. And a lot of those reasons aren’t necessarily going to be because of an economic strength that the economy overall could learn from,” said Kathryn Anne Edwards, a labor economist at the Rand Corp.

Some of those strengths suddenly became weaknesses during the pandemic. Hawaii’s unemployment rate in 2019 was 2.5%. Now it’s over 8%, at the bottom of the list. That’s because its biggest industry is tourism, and getting there requires a long flight.

And among the states faring best?

“There’s no one explanation that’s most predictive. There’s lots of factors that are operating in a state’s economy at one time,” Edwards said.

Many states with the lowest unemployment rates have diverse economies. Like Utah, with national parks, winter sports, cattle and tech. And it has the youngest workforce, which has helped cushion its economy during COVID-19.

That means the state didn’t have to lock down as much as other states.

More effective vaccination rollouts have also helped some states recover faster. Enter Vermont, which has the highest vaccination rate in the country and one of the lowest unemployment rates — So low that it’s actually facing a labor shortage.

“If everybody in Vermont right now that was on unemployment suddenly entered the workforce, we would still have a worker gap,” said Charles Martin, government affairs director at the Vermont Chamber of Commerce.

A gap of about 10,000 people for what Martin said are mostly low-skill, hourly jobs.