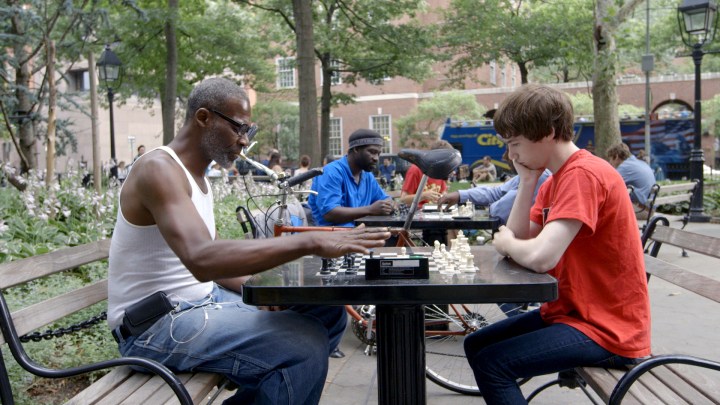 This interview is part of our series Econ Extra Credit with David Brancaccio: Documentary Studies, a conversation about the economics lessons we can learn from documentary films. We’re watching and discussing a new documentary each month. To watch along with us, sign up for our newsletter.

When she set out to make a film about America’s expansive prison system, documentarian Brett Story decided to focus on how prisons and jails touch life outside their walls — and the ways in which the multibillion-dollar prison industry shapes the U.S. economy.

The result was “The Prison in Twelve Landscapes,” which takes viewers to — among other places — Wheelwright, a former coal town in Eastern Kentucky whose residents’ dreams of jobs and economic revitalization hang on rumors of a local prison reopening.

Story, who directed the film, said their sentiments were representative of those felt by people across the country whose economic futures have become dependent on prisons and jails.

“Over especially the last 30 years, we’ve seen prisons built primarily in rural areas that have been in economic decline,” she said. “And the real tragedy is not just that prisons have expanded, and more and more people are being locked up for longer periods of time, but that ordinary working people in these communities aren’t given any other options for imagining that they have a future.”

Story spoke with “Marketplace Morning Report” host David Brancaccio about some of the film’s economic themes — including the barriers to employment that many formerly incarcerated people experience after release. The following is an edited transcript of their conversation.

David Brancaccio: This is, in some ways, almost closer to a poetry anthology using film than it is a policy document addressing America’s culture of incarceration. Why the choice not to load up your film with policy wonks?

Brett Story: I think I just wanted to make a different kind of prison film — a film about the prison that was unlike the films we’re used to seeing, and also a film that would encourage people to think differently about how the prison system is deeply implicated in all sorts of other aspects of ordinary political life.

For one Appalachian town, a prison means jobs

Brancaccio: The dominance of the criminal justice system in American life, that’s the overall theme. One of your 12 landscapes is in Wheelwright, Kentucky. You speak with a librarian in the town and he tells you this:

Sam Little: When coal left, no one had a backup plan, and it just kind of fell apart from there. For a while the prison was sustaining the economy really well, and then the prison pulled out, so now it’s kind of back to the way it was. We’ve gotten word that the prison will be reopening, so there will be jobs coming back.

Story: How do you feel about that?

Little: I love it. I would love to see that happen.

Story: It was representative. And it’s representative not just of that region, but all across the country where, over especially the last 30 years, we’ve seen prisons built primarily in rural areas that have been in economic decline; de-industrialized rural areas like the coal towns of Eastern Kentucky. And the real tragedy is not just that prisons have expanded, and more and more people are being locked up for longer periods of time, but that ordinary working people in these communities aren’t given any other options for imagining that they have a future; that their towns have a future. So we meet people like this man — who doesn’t harbor any particular ill will towards the people who are incarcerated, but just wants to see his friends and his family members have stable work. And unfortunately, the work that they’ve been promised, and not always delivered, but the work that they’ve been promised, has come in the form of the opportunity to work as a prison guard in a new prison that’s being built in their communities.

Brancaccio: This chapter of your film really touches upon one of the deepest ironies in economics, I have to say, which is that economic growth can be good things and bad things. And if you, for instance, waved a magic wand and wiped out crime in America, it would devastate the economy.

Story: Yeah, I think that that’s an uncomfortable way to think about the prison system. We imagine that prisons are there as a safety valve; as a way to somehow solve or resolve the problem of violence and harm in our society. And the unfortunate truth is that we actually have a mass unemployment crisis, we have an economic crisis — many kinds of economic crises, but especially in the era of globalization where we’ve seen towns just decimated by capital flight. And so there’s a way of thinking economically about prisons being built as a kind of real estate, on the one hand: the way in which land that’s not in use any longer and surplus capital that’s looking for a place to be invested is going into the building and construction of prisons and jails. And then also local economies are becoming absolutely absorbed by the promise of a new prison or jail, whether it’s in the form of health services or food services, or jobs as prison guards.

Brancaccio: In another chapter, there’s a woman who’s helping to maintain a line against a west coast wildfire. It turns out she is an inmate. She says this:

Unnamed incarcerated firefighter: Who knows what’s going to happen when we get out? We’ve already got one strike against us because of the felony on the application. If everybody paroled here with at least a chance to be a firefighter, then that would be something. But that’s not what happens. Nine times out of 10, you’re not going to be a firefighter.

Brancaccio: So this is less a comment on prison labor in America, right? It’s more about the notion of rehabilitation — does it exist?

Story: Yeah. It’s also about this sort of idea, maybe you’d even call it a fantasy, that we don’t need the people that are locked up on the inside. That they’re somehow not of use and, in fact, a scourge on society. And I really wanted to flip that narrative — not just to show the fact that a large percentage, today, of California’s wildfires are being fought by prisoners who are trained on the inside as firefighters and then sent out to fight these wildfires, but that’s that’s a potential way in which people can play a role. And I think that there’s a kind of irony to the fact that a lot of these firefighters, they’re being paid very little. Of course their labor is being exploited; they’re being paid maybe $2 a day, it’s terrible. But also, they feel themselves as valuable. They can demonstrate their skills and their capacity. They feel, as this woman says, like heroes when they go out and save someone’s house or save someone’s family. But they’re not given an opportunity, when they’re let out, to play that same role. And I think there’s a conversation to be had in this country about the way in which people are kept out of the labor economy because they have been labeled felons or criminals.

Brancaccio: There’s that intense moment in that scene where this firefighter, who’s an inmate, talks about local residents who want to engage with her and thank her for the work that she’s doing, not realizing she’s an inmate. She’s not allowed to talk back, to respond, right?

Story: Yeah. It’s an open secret that California’s wildfires, and wildfires in Washington state and elsewhere, are also being fought by incarcerated people. But there’s a kind of public relations disaster that the state feels if the people that are saving your home are known to be incarcerated, or criminal people. And so the people that are fighting the wildfires are told explicitly, “Don’t engage. Don’t tell them who you are or where you’re coming from.” And it’s really unfortunate because there’s also a civic solidarity that happens in these moments of crises. You hear about it in a lot of these fire towns across the west coast and elsewhere, where in moments of disaster people are coming together and helping each other and saving each other. And there would have been opportunity for a person who’s demonized by society to be recognized as someone who’s helping their fellow American.

A new conversation about mass incarceration and the economy

Brancaccio: I found the film gorgeous, it’s immersive. But I want to ask you, the director, did it work? Did this movie provoke the kind of discussion that you’d hoped?

Story: It really did, and more. I think your audience can probably imagine why it might be a hard sell to try and make a film, and to tell people you’re making a film about the American prison system in which, in this case, I don’t show any prisons. I don’t take the camera or the audience inside an actual facility. And the whole premise, as you’ve said, is that we traveled to all these landscapes where we see the different ways in which the prison functions as a kind of central institution in American life. And the point was just to provoke new thinking and new conversation — not just about the role of the criminal justice system and our society, but also how the government spends money; how opportunities and resources are allocated. So I hope that it doesn’t just start general conversation, but also specific conversation about, for example, should the future of the post-coal economy in Eastern Kentucky really be a prison future? Are prisons the only way in which we can imagine the economic revitalization of de-industrialized communities? And the hope is to also imagine that there’s a different way to imagine a future and better life than just building these jails and these prisons all over the country.

"The Prison in Twelve Landscapes"EEC: Documentary Studies
Tags in this Story
Share this Story