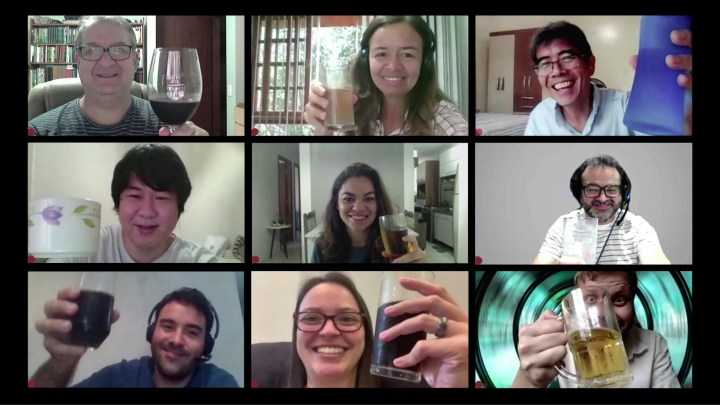 On and off since the start of the pandemic, Marketplace’s New York office has been holding virtual happy hours over Zoom. In some ways, they’re better than the real thing. I get to see colleagues who work odd hours or usually have to rush to pick up their kids from school. I’ve met parents, partners and puppies. Sometimes there’s even baby therapy.

There are also drawbacks: the awkward pauses, the way everyone has to take turns talking and how sipping a beer at the desk or dining table you’ve been sitting at for eight hours doesn’t always feel so happy.

True happy hour seems like a relic from the Before Times. It’s the after-work tradition workers use to bond and blow off steam and bars use to lure in customers during the early evening hours. But with lots of people still working from home and many companies going hybrid or fully remote, the pastime has changed for both workers and the watering holes they once frequented.

Socializing at work is a key part of job satisfaction. And it’s a vital aspect of career advancement. “Social relationships matter,” said Jeffrey Pfeffer, a professor of organizational behavior at the Stanford Graduate School of Business. “To the extent people know you, they’re more likely to give you a higher evaluation.”

But the spontaneity this kind of kinship requires has been lost during the pandemic — and it’s not just workers feeling the effects. For many bars, happy hour has become a dead zone. And the deals, the discounted apps and drinks, are mostly gone, too.

“I mean, if you look at what it’s all about, it’s a reduced price. That’s the last thing we wanted to do during the pandemic is reduce prices. It’s in crowded spaces. And it’s gathering after work. It’s everything in the equation that didn’t fit at all,” said Michael Maxwell, a partner at Blue Orbit, a hospitality consulting company.

In normal times, a good happy hour at a 50-seat bar can boost daily sales by $1,000 or more, Maxwell said. But even as restrictions relax, he expects bars will keep discounts out of the equation to take advantage of the spending boom the industry is already seeing.

It’ll be a while before that happens in business districts. At 5 p.m. on a Wednesday at Rosie Dunn’s, an Irish bar in midtown Manhattan, just a few customers nursed drinks at the big, wooden bar. “The place would be thronged with people right now,” said co-owner Niall Moran. “There’d be just the noise and the clattering of the glasses and the laughter and, you know, just the general merriment.” The office crowd used to make up 70% of the bar’s sales.

Still, Moran, who’s been in the industry for 30 years, isn’t planning to put a happy hour sign outside his bar anytime soon. He’s worried that rising food costs and wages mean it’ll be harder to make a profit. Instead, he’s redoing the menu to get people to stay for dinner.

“You hear, ‘Oh my God, no one is ever going back to work again,'” he said. “I’m certainly betting on New York. I mean, I know it’s coming back.”

And maybe he’s right. A few minutes later, a group came in wearing blouses and suit jackets. Turns out, they used to be regulars.

“Every day,” Megan McEnroe said, laughing. She works in human resources at a financial-services firm nearby. “I’m serious. I’m actually not kidding.”

Right now, coming into the office is optional. But Chadi Bitar makes the commute a couple of times a week. “And for me, specifically, I come in just to see and socialize with my co-workers to break up the week. I can do my job from home just as easily, but it’s really for the socialization aspect,” he said.

Even if the deals don’t return, some workers are committed to keeping 5 o’clock alive.