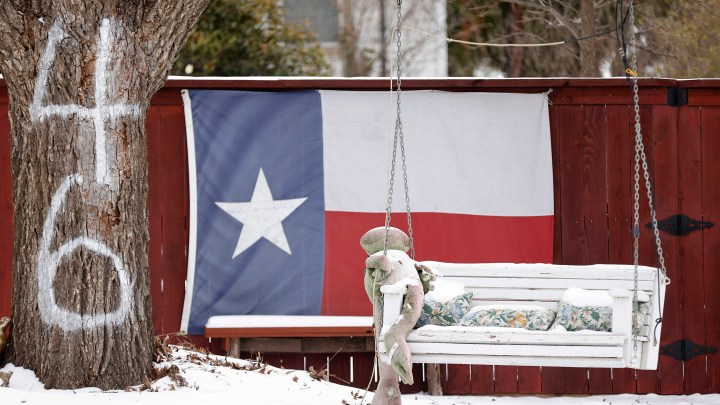 COPY
People all over the state are calling around for plumbers. They’re also calling their insurance companies to figure out what damage is covered. Ron Jenkins/Getty Images

People all over the state are calling around for plumbers. They’re also calling their insurance companies to figure out what damage is covered. Ron Jenkins/Getty Images
Listen Now

The power went out at in Adrianne Yule’s house in Texas early Monday morning.

“And we made it through that night. But, I mean, it was pretty miserable. And, you know, I have two kids,” she said.

Yule lives in Keller, a town just north of Fort Worth with her husband, 10- year-old daughter and 6-year-old son.

After that miserable night they piled into the car and headed over to her father-in-law’s place about an hour and a half away. But before they left home, they followed the standard advice: Leave the faucets dripping to prevent the pipes from freezing.

They found out when they returned the next day that it didn’t work.

“Basically we had like 2 inches of water in the house,” Yule said. “It looks like it was a pipe in the attic that burst, and then came down into like a broom closet, and then that flooded, and then that went to the whole house.”

She said her husband and father-in-law removed most of the standing water using shop vacs. Then, it was time to call an expert

Fifteen phone calls just to find someone to come out and check on her house.

Joe Cooper, a plumbing apprentice coordinator in Austin, laughed when asked whether there are enough plumbers around to do the work that’s coming.

They’ll get there eventually, but the plumbing line is already backed up.

By the middle of this week, the Austin Fire Department had already responded to almost 700 burst pipe complaints. And that’s just in Austin. People all over the state are calling around for plumbers, too.

They’re also calling their insurance companies to figure out what damage is covered.

“Insurers commonly and explicitly cover damage that’s caused from busted or ruptured pipes,” said Andrew Hurst, a data specialist with ValuePenguin, a company that provides consumer advice on insurance. “Secondly, many policies reference power failures. If the power fails in an offsite location, and that power failure results in a covered loss of which water damage is one in this situation, the insurer will cover the loss.”

That’s what happened in Texas. Power went out. Heat went off. Pipes burst.

Yule has a $1,000 homeowners insurance deductible on her policy. She said she’s hopeful it’ll will cover any damage done to her home as a result of the flooding. But whether it’ll pay for damage done to her furniture and rugs is a whole other question.