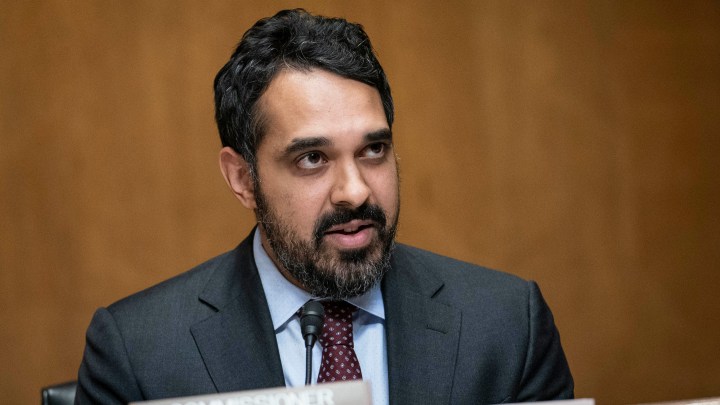 COPY
"The issue is that if you do too little, that means that people are going to go hungry," says Bharat Ramamurti, deputy director of the National Economic Council. Sarah Silbiger/AFP via Getty Images

"The issue is that if you do too little, that means that people are going to go hungry," says Bharat Ramamurti, deputy director of the National Economic Council. Sarah Silbiger/AFP via Getty Images
Listen Now

President Joe Biden and Treasury Secretary Janet Yellen met with the chief executives of JPMorgan Chase, Walmart, Gap and other large businesses Tuesday to discuss the administration’s $1.9 trillion economic relief plan. With debate over the size and the specifics of Biden’s plan swirling in Washington, “Marketplace” host Kai Ryssdal talked with Bharat Ramamurti, deputy director of the National Economic Council.

Kai Ryssdal: Let’s start with the news of the day, shall we? The meeting in the Oval Office today between President Biden and Secretary Yellen and some big business CEOs. The head of the Chamber of Commerce was there, Jamie Dimon from JPMorgan Chase. What is the president trying to do, getting big business lined up behind him and this relief plan?

Bharat Ramamurti: I think the president’s pitch today was to make sure that business leaders were lined up behind his American Rescue Plan, which is his plan to make sure that we beat COVID, that we get people vaccinated, that we’re able to reopen our schools as quickly and as safely as we can and that we deliver relief to the families that really need it out there. And so he’s been making his case to folks on Capitol Hill, he’s been making his case to the American people. And today he’s making his case directly to some of America’s business leaders so that they can join the fight as well.

Ramamurti: Well, I think that he is looking for their support for the bill and for their acknowledgment that we need to go big in this moment. I think what the president is hearing from his top economic advisers is that we are at a precarious moment. Just last week, the jobs report came out and showed that job growth is really stalling in America, even though we’re about 10 million jobs short of where we were pre-pandemic. And so, from Secretary Yellen down to his other economic advisers, there is a uniform belief that we need to go big. And we need to deliver relief to folks who need it. We need to fundamentally alter the trajectory of the recovery. And we need to make sure that we’re putting money behind putting vaccines in people’s arms because the fastest way to get the economy moving again is to make sure that we beat COVID.

Ryssdal: Totally agree with the vaccine being this economy right now, I cannot and will not argue with that. But I do want to ask you about this idea of going big. As you know, there’s some consternation by some that maybe $1.9 trillion is too much. That it is, in fact, more than the economy needs, given where, for example, the Congressional Budget Office says we’re going to be this summer. Where’d you get $1.9 trillion? And is that too much?

Ramamurti: No, we don’t believe it’s too much. And so I want to talk a little bit about the process by which the president and his team put this package together. I would describe it as a bottom-up process. We are trying to assess the needs of the American people and deliver relief in a way that’s designed to fill those needs. So for example, there are nearly 7 million Americans who are behind on their rent and at risk of eviction. We need to provide rental assistance to those people, and the package provides the amount of rental assistance needed to make sure we keep them in their homes. Similarly, when we look at what it takes to reopen schools quickly, we are looking at the best available evidence and come up with a figure — north of $100 billion — which is necessary to make schools make the investments they need to make to reopen now and into the next school year. So it is a bottom-up package. And from Secretary Yellen to other top economic advisers, the view is we are in an asymmetric risk situation. And by that I mean the risks of going too small with this package far outweigh the risks of going too big. So when we add that all up, I think the president is very comfortable with the size of the American Rescue Plan. And I think the American people agree with him because there’s something like 70% support for the package among the public.

Ryssdal: Let’s talk about the flipside of going too small, which is the concern the president has. One of the concerns about going too big is that there may be some inflation coming in this economy with so much money coming in so soon, and with a pent up demand that is sure to happen once people can go out and spend and travel and and enjoy life again. Are you not worried about that?

Ramamurti: Well, look, we’re monitoring all sorts of different risks to the economy, and Secretary Yellen and others have made clear that they’re carefully monitoring the risk of inflation. The issue is that if you do too little, that means that people are going to go hungry, it means that people are going to be booted out of their homes in the middle of a pandemic, it means that child poverty will continue to grow in this country. And those are just not acceptable outcomes to the president. And look, we are far below the [Federal Reserve’s] inflation target and have been for a very, very long time. And not to get too wonky —

Ramamurti: Yeah, I think that [Federal Reserve] Chair [Jerome] Powell and others have said that the goal is actually to increase inflation to get closer to that 2% target that they have. We’re a long ways off from that. And I think some relief dollars into the economy — particularly when it’s targeted towards the folks who need it most — is exactly what we need to get our economy going and to start getting closer to the target that the Fed has established.

Ramamurti: Yeah, he’s made clear that whatever parliamentary procedure the Senate and the House want to use to make sure that they can deliver this relief to the American people is fine with him. And I think, frankly, that if you’re somebody looking at being evicted from your home, or you’re trying to figure out how to put groceries on the table for next week, I don’t think you particularly care what kind of parliamentary maneuver is used to make sure you get that relief.

Ryssdal: I wonder how, given the  makeup of the president’s economic team — many of whom were around in 2008 and 2009 — how scarred people are by the prospect of going too small with a relief bill?

Ramamurti: Well, I can’t speak for others. And I was not personally there in 2008 and 2009. But I do think that there is an assessment of the latest and best economic evidence, and all of that evidence is overwhelmingly on the side of leaning towards going big. You look at where interest rates have been and how they have been low for an extended period of time. And you weigh the costs and the risks of adding to the deficit by doing a plan of this size, versus the benefit to the economy and the effect on the debt long run of having a faster growing economy. I think it very clearly comes out in favor of going big. And as I’ve noted before, the American people seem very firmly on the president’s side on this one. Seventy-plus percent are supportive of this package that includes, in many polls, a majority of Republicans.

Ryssdal: Let me pick up on something you just said, because it struck me when the president said something similar a number of weeks ago that he is taking a page from the Republicans’ playbook. He’s saying, “look, we have to borrow, we have to do deficit spending. It doesn’t matter how we pay for it.” And maybe you don’t know this, maybe you weren’t in those conversations, but how did he come around to: “You know what? We’re gonna borrow the money, the heck with it?”

Ramamurti: Well, I think again, he and his team have been deep into the economic evidence. And I think over the last five or 10 years, the economic evidence in support of more robust deficit financing, particularly for temporary emergency measures such as this one, is pretty airtight. And so I think all the president is doing here is following the best economic evidence. And going forward, I think he’ll continue to weigh the evidence and weigh the data and make decisions accordingly. And I would just add, the president has been clear that when it comes to permanent changes in policy, in other words, policy that involves spending each and every year for the foreseeable future, that he does think that that should be offset with new tax increases on the wealthy and on big corporations. Again, I think that is a view that is backed up by the best economic evidence.