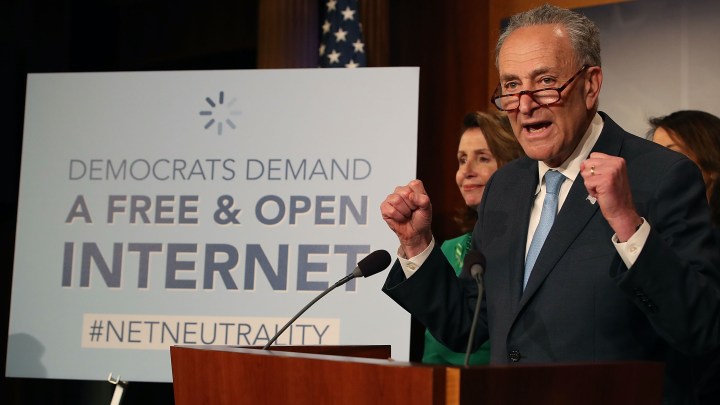 COPY
The net neutrality "pingpong game" has been going on since 2002. Above, then-Senate Minority Leader Chuck Schumer speaks on net neutrality at a press conference in 2018. Mark Wilson/Getty Images

The net neutrality "pingpong game" has been going on since 2002. Above, then-Senate Minority Leader Chuck Schumer speaks on net neutrality at a press conference in 2018. Mark Wilson/Getty Images
Listen Now

In today’s installment of “Elections Have Consequences,” the Biden administration has turned its attention to net neutrality. Specifically, to undoing one of the Trump administration’s net neutrality policies by withdrawing from a lawsuit to overturn California’s internet regulations.

As a refresher, the net neutrality debate is about whether internet service providers can give special treatment to one kind of internet traffic over another.

“This pingpong game has now been going on since 2002,” said Gigi Sohn, a fellow at the Georgetown Law Institute for Technology Law & Policy.

California lawmakers didn’t agree with the Trump administration’s position, so the state set its own policy.

Brent Skorup at the Mercatus Center said the goal was to undermine the federal rules.

“In the short term, California’s rules could serve as a de facto net neutrality policy for the nation. And I think that’s intentional. You see California doing this in other areas, like emissions testing,” he said.

That’s why the Trump administration decided to fight the California law.

Now, the Biden administration is dropping that challenge, but that doesn’t mean it’s over, according to Samir Jain, policy director at the Center for Democracy & Technology.

“The lawsuit is actually going to continue, because in addition to the Trump administration, previously, the industry groups had sued to stop the California statute, so that part of the suit still is ongoing,” he said.

But that probably won’t matter much, Sohn said. She expects “that the Biden [Federal Communications Commission] will restore net neutrality and also restore its authority over the broadband industry.”

The only real, long-term resolution may be if Congress rather than one of the agencies makes a final decision.