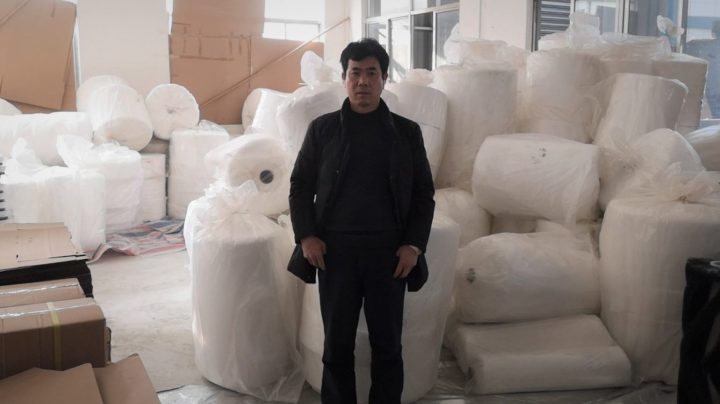 COPY
Manufacturer Qian Wensheng is stuck with rolls of substandard melt-blown fabric that he cannot use in face masks. Courtesy of Qian Wensheng
COVID & Unemployment

Manufacturer Qian Wensheng is stuck with rolls of substandard melt-blown fabric that he cannot use in face masks. Courtesy of Qian Wensheng
Listen Now

Almost a year ago, China shut down much of its economic activity to contain the outbreak of the COVID-19 virus.

Streets were emptied and most industries, except for essential services, were shut for months.

The lockdown measures were strictest in central Hubei province, where the virus outbreak first began.

“Hubei was entirely sealed. No one could enter or leave,” resident Liu Yi said.“We weren’t even allowed to step outside the front door.”

The strict pandemic controls lasted for two months, during which Liu received no income. He sells ingredients to bubble tea and fruit tea shops, which did not get subsidies from the Chinese government. Citizens did not receive cash handouts.

Since Liu lives in an area where face masks are being made, he figured he could invest in personal protective equipment.

“I partnered with a couple of friends to open a factory making melt-blown fabric,” he said.

Melt-blown fabric is the crucial layer in surgical masks that blocks tiny infectious particles. It is hard to manufacture ones that filter 95% of small particles. This is the reason there have been shortages of top-grade medical masks, the N95s, during this pandemic.

“I thought I could recover the costs within a year without a problem,” he said. “I knew the high profit margins wouldn’t last long.”

But for weeks, the machine would barely run, and when it did, the melt-blown fabric came out hard and brittle. It was virtually unusable for medical face masks.

Further east in Anhui province, Qian Wensheng had retooled his brush factory to produce face masks but was having problems with the same machine as Liu.

Within a month, the machine’s hot-air fan, mold, air compressor and the core part, called an extruder, had to be replaced.

“At first, we thought the problem was with the commissioning of the machine, but I finally realized the machine could not produce fabric with a 90% filtration rate, let alone 95% as the manufacturer promised,” he said.

“The thickness was uneven, and there were even small holes in the fabric.”

A 95% filtration rate is necessary for use in N95 face masks. There were bigger profit margins selling N95s once the U.S. and other countries went into lockdown last spring.

The machine manufacturer, Demark, did not respond to Marketplace’s request for comment.

He admitted there have been some problems with a small number of machines.

While Demark does not specialize in ones making melt-blown fabric, both Liu and Qian both said they had no doubts buying from the company.

“On March 30, 2020, a senior Communist Party official from Zhejiang province visited the firm, Demark, and encouraged the company to produce qualified products to combat the pandemic,” Qian said.

“We saw this as an endorsement from the local government itself.”

Qian said he expected the government would step in to help machine buyers. Instead, he said he is under government surveillance and was called by the police over the matter.

“This is an act of intimidation,” he said. “I will not give up. This is not fair.”

When Marketplace reached out to other machine buyers, another man said he had been contacted by the police.

“The officer said don’t accept media interviews,” the machine buyer said. “This is a business dispute. Why are the police interfering? What does it have to do with them?”

“As the Lunar New Year approaches, maybe I will have to sell my apartment. I have no other choice.”

The county government did not respond to Marketplace’s request for comment, but an official with the publicity department of Changxing County told a local media outlet that it had already punished Demark for exaggerated advertising over its melt-blown fabric machine.

Another Communist Party secretary from Changxing County, where Demark is based, also laid blame on the machine buyers, many of them new to the face mask sector, for making “blind investments” without checking that the market standards had been upgraded.

Between May and August, many customers showed up at the company’s doorstep to complain, including Qian.

“Hundreds of people had the same experience as me. It was a trap by Demark through and through. This is a company of fraudsters,” he said.

One machine buyer was caught on video by a local media outlet threatening to jump from a building window.

“I cannot wait any longer for the company to keep delaying these talks,” the man said. “I’ve not sold anything for weeks!”

At the start of the pandemic, face masks were in such short supply, even melt-blown fabric with lower filtration rates were snapped up.

At the same time, China raised the standards for masks after the United States and other countries complained of substandard Chinese products.

Thus, the price of face masks started to plummet.

“Hundreds of people had the same experience as me. It was a trap by Demark through and through. This is a company of fraudsters.”

Qian and others are trying to sue the machine company for a refund but are having trouble getting the case heard by the courts.

Liu is back to sourcing ingredients for bubble tea and fruit tea shops, which brings in enough money to cover the interest on his bank loan. He also owes money to family and friends.

“As the Lunar New Year approaches, maybe I will have to sell my apartment,” he said. “I have no other choice.”

Liu said he wishes he bought the machine from a different company but does not regret taking a gamble during the pandemic.

“Chinese people are very good at learning new skills. We have passion in our hearts. Now I’m fully skilled as a technician in the melt-blown fabric industry,” he said. “The problem is the market is no longer there.”