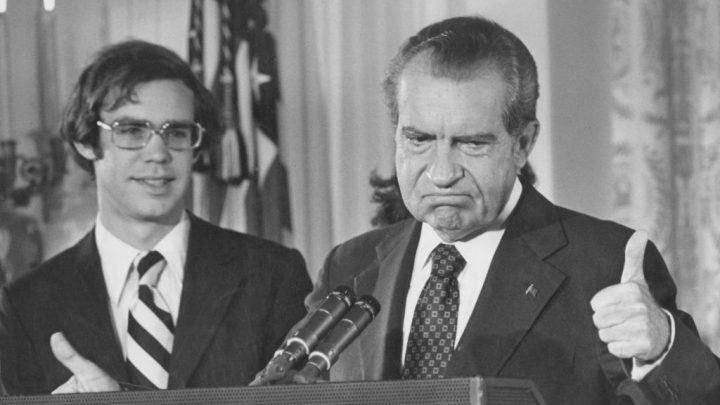 COPY
Richard Nixon gives the thumbs up as he addresses the White House staff upon his resignation as 37th President of the United States, Washington, D.C., in 1974. His son-in-law, David Eisenhower, is with him on the left. Keystone/Hulton Archive/Getty Images

Richard Nixon gives the thumbs up as he addresses the White House staff upon his resignation as 37th President of the United States, Washington, D.C., in 1974. His son-in-law, David Eisenhower, is with him on the left. Keystone/Hulton Archive/Getty Images
Listen Now

This week marks 50 years since President Richard Nixon signed the law that created OSHA, the Occupational Safety and Health Administration. It protects workers from hazards on the job, which is a role that has taken on new significance during the pandemic. But while workplace safety has become a big issue, the agency’s enforcement resources have gotten smaller.

OSHA oversees about 8 million workplaces in the U.S., and it’s always been a lean operation, according to Deborah Berkowitz with the National Employment Law Project.

But during the Trump administration, she said, “they were just not replacing inspectors as inspectors retired so that the number of inspectors fell to an all-time low.”

Inspections act as a strong deterrent, according to research from Matt Johnson at Duke University.

“We found on average that one inspection averted about 9% serious injuries over the next couple years,” he said.

He also found publicizing major workplace health and safety violations with press releases significantly improved compliance by other companies located in the same region. President-elect Joe Biden has called for doubling the number of OSHA inspectors.