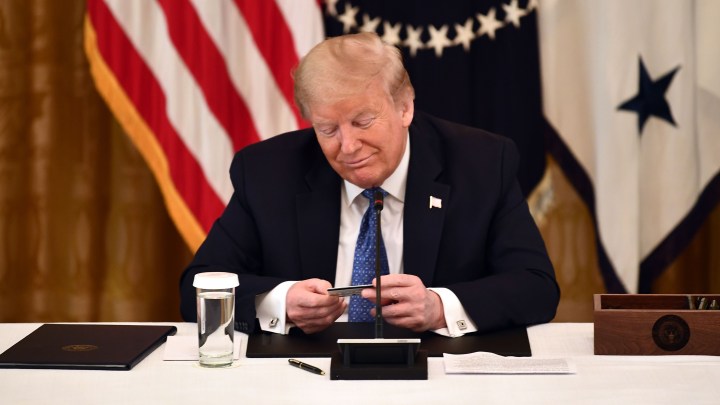 COPY
President Donald Trump holds one of the prepaid debit cards being issued by the IRS, during a Cabinet meeting in May. Brendan Smialowski/AFP via Getty Images
COVID & Unemployment

President Donald Trump holds one of the prepaid debit cards being issued by the IRS, during a Cabinet meeting in May. Brendan Smialowski/AFP via Getty Images
Listen Now

The Treasury Department has already started sending out the new round of pandemic relief payments. The IRS says it started making direct deposits into some people’s bank accounts Tuesday.

People who don’t have a bank account on file with the agency can look forward to getting either a paper check or a prepaid debit card in the mail. The Treasury said it sent out around 4 million prepaid cards during the first round of relief. The cards have some advantages over paper checks — but some drawbacks, too.

People who receive the prepaid debit cards are the most likely to not have bank accounts. Tyrone Ross, CEO of the investing platform Onramp Invest, said they’re the people who are going to need to spend the money as quickly as possible.

Debit cards can also be cheaper than checks for people who don’t have bank accounts. Cashing a check costs them money. But with a card, said Chantel Boyens with the Urban Institute, “there is a network of ATMs where if you have the card, you can access your funds without any fees.”

But people can only make one withdrawal for free from an out-of-network ATM. After that, it costs $2. Boyens said lower-income people are more likely to pay those fees.

“They may be located in areas where they don’t have as good of access to in-network ATMs,” she said.

The cards also come with terms of service. And Ira Rheingold, executive director of the National Association of Consumer Advocates, said some of them put card users at a disadvantage.

“You, consumer, if you have a complaint, you cannot go to court. You cannot be part of a collective action, a class action,” Rheingold said.

Members of Congress sent a letter to the Treasury this week, asking it to remove those clauses and reduce any fees.