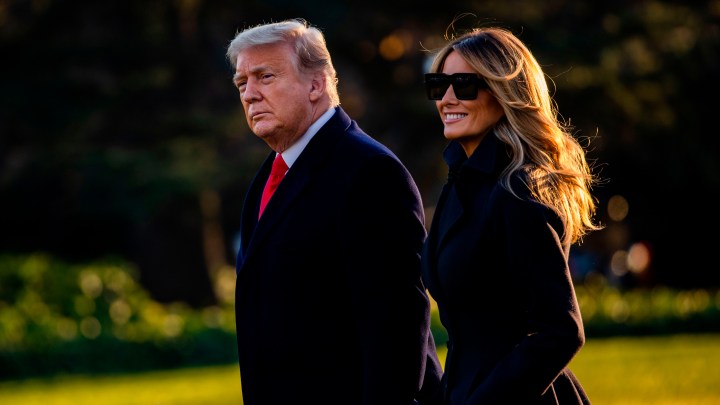 COPY
President Donald Trump has signed the COVID-19 relief bill after refusing to do so for several days. Above, the president and first lady Melania Trump depart the White House for Mar-a-Lago last week. Samuel Corum/AFP via Getty Images
COVID & Unemployment

President Donald Trump has signed the COVID-19 relief bill after refusing to do so for several days. Above, the president and first lady Melania Trump depart the White House for Mar-a-Lago last week. Samuel Corum/AFP via Getty Images
Listen Now

After several days of delay, President Donald Trump signed the $900 billion COVID-19 relief package. But the president’s delay has caused a lot of confusion about how some of the elements of that relief package will be distributed.

By signing this on Sunday, the president let two key federal pandemic unemployment benefit programs expire briefly, but the one-day gap is a big deal.

Jobless benefits are paid on a weekly basis. When Trump signed the relief bill Sunday, this week had already begun, and it looked like none of the benefits could be given for the week when the bill became law.

Many thought that meant 20 million people would go without the federal jobless benefit extension, the benefit for gig workers and the $300-a-week top-up everyone gets through March.

Ernie Tedeschi, an economist at Evercore ISI, said that could have meant $9 billion or $10 billion in lost relief just for the one week. But that didn’t happen.

The rumor mill was churning: Maybe some of the states could figure out some workarounds, at least to get the $300-a-week payments to apply right away.

Michele Evermore at the National Employment Law Project said even if states end up paying for this week, it still might take a couple weeks for all the state unemployment systems to get these federal benefits flowing again, since they did expire. But everyone should get all the back pay they’re entitled to, eventually.