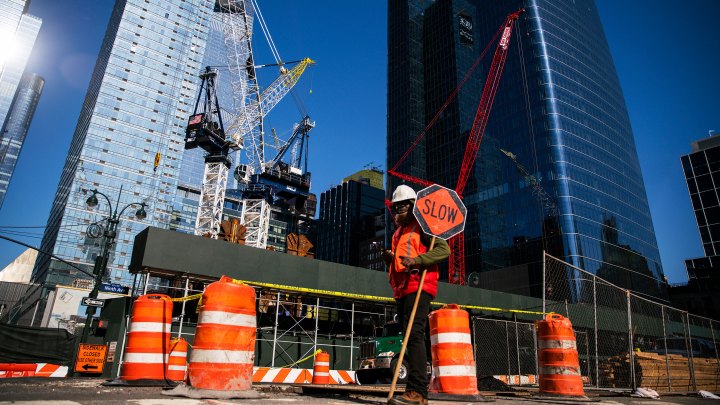 The trade group Associated General Contractors of America reported that more projects were canceled than were started in the last 12 months, and that construction employment declined in most metro areas.

The Houston area lost the most construction jobs of any big city over those 12 months.

Before COVID-19 hit and the economy tanked, Houston Methodist Hospital was well along in its plans to expand downtown. Centennial Tower is a $700 million-plus project to serve more patients.

“The day that I had to call the architects and the engineers and the general contractor back in March and tell him we’re gonna put this on hold, that was a hard call,” said Sid Sanders, senior vice president for design, construction and real estate at Houston Methodist.

Sanders said the tower was put on hold because the economy’s too unpredictable right now.

“Centennial is over a million square feet,” he said. “It’s going to be somewhere around 30 floors. It will probably peak out with close to 1,000 people on that job site during the peak of construction.”

Sanders said he’s hoping to get started on building the Centennial Tower in the first part of 2022 — about a year later than first planned.

Richard Branch, chief economist for Dodge Data & Analytics, said total construction spending in Houston in the first nine months of 2020 was about $15 billion.

“That sounds like a lot of money. However, that’s full 17% below where Houston was during the same period of 2019,” he said.

One of the reasons Houston is a little worse off than the U.S. as a whole is because of the slowdown in the energy sector. Patrick Jankowski, senior vice president of research at the Greater Houston Partnership, said COVID-19 is making chemical plants and refineries along the Houston Ship Channel hit pause.

“We’ve seen a lot of those projects put on hold now, as the industry is trying to assess where we are going with energy demand and where are we going with demand for chemicals and plastics,” he said.

The demand for construction workers is down, too.

“In February, just before the pandemic hit, we had 244,000 people working in the construction industry in Houston. The pandemic cost us 31,000 of those jobs. We’ve only gotten back about 3,000. We’ve gotten back less than 10% of what we lost,” Jankowski said.

Stan Marek said his Houston workforce is down 20% from last year. He’s CEO of Marek Brothers, one of the largest commercial interior contractors in Texas. He was all set to bid on the Centennial Tower project at Houston Methodist when the project got delayed.

“Now as far as the workload, yes, there have definitely been jobs stopped. But, you know, there’s work,” Marek said.

Marek said there’s still some work because of contracts secured before the pandemic. But he’s not expecting things to get much better until 2022.