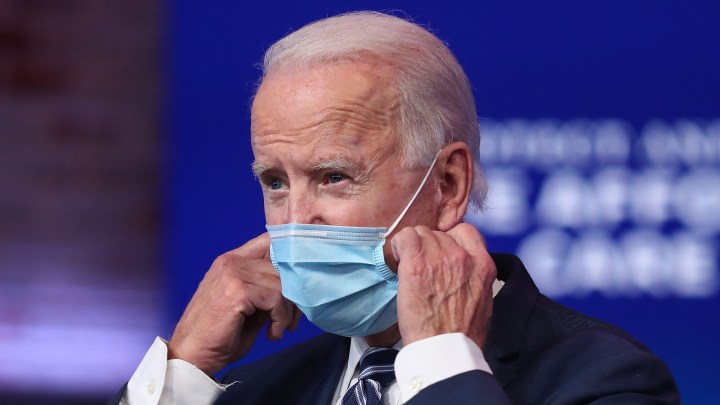 COPY
"Changing your allocation between stocks and bonds, moving to cash — any big change caused by the headlines, that's an emotional reaction, and emotions are never a good guide star for managing your assets," says Barry Ritholtz. Joe Raedle/Getty Images
Elections 2020

"Changing your allocation between stocks and bonds, moving to cash — any big change caused by the headlines, that's an emotional reaction, and emotions are never a good guide star for managing your assets," says Barry Ritholtz. Joe Raedle/Getty Images
Listen Now

The prospect of a new presidential administration led by President-elect Joe Biden has led some to wonder if he’ll be tougher on tech companies or make good on his promises to raise taxes on high earners. But does this change in leadership mean market participants should start to move their assets or restructure their portfolios?

“For the most part, none of this is something that people should use as a basis for changing their portfolios,” said Barry Ritholtz, chairman and chief investment officer of Ritholtz Wealth Management.

Ritholtz spoke with “Marketplace Morning Report” host David Brancaccio about why you shouldn’t make any sudden moves with your retirement account right now. The following is an edited transcript of their conversation.

David Brancaccio: Let’s talk here to real people, not you big dogs with your fancy portfolios. Maybe someone’s got some retirement money in the markets, maybe another nest egg where they have some discretion as to how it gets allocated. President-elect Biden: Does that headline, in itself, mean it’s time to make some adjustments?

Barry Ritholtz: So let me throw that question back at you in a different way. Pick any elected president, go back 100 years. I mean, with the exception of President Hoover, because we know what’s going to happen with the 1929 crash and the Great Depression, it’s hard to see how electing any president makes a difference to people’s long-term portfolios. One of my favorite things to do is to show people a chart of employment, of wages, of GDP, of retail sales, going from 2010 to 2020, with the dates stripped out of the bottom, and say to people, “show me where the Obama presidency ended, when the Trump presidency begins.” You can’t do it, it looks like the exact same path.

Brancaccio: It’s interesting. And I suppose underscoring your point is that at the moment, it looks like the U.S. Senate will be controlled by a different party from the White House. And that would suggest that significant radical new changes in policy may not be happening.

Ritholtz: So let’s clarify that slightly. In order for there to be divided government, the Republicans must retain only one of two seats in the Jan. 5 Georgia runoff. The betting markets, the statistics, suggest the Republicans have an easier path — they just have to win one of two seats. The Democrats have to sweep. But that said, one of the things I think people forget, Biden is this centrist, deal-making, across-the-aisle, old-school politician. You know, Bernie Sanders lost. Elizabeth Warren lost. The left wing of the Democratic Party lost. Biden is this middle-of-the-road guy. He wants an infrastructure plan, he wants to rebalance some of the Trump tax cuts, which benefited a lot of the top 1%, a lot of us Wall Street fat cats — I’m not quite a fat cat but, you know, I live in the town right next to the fat cats. So those sort of adjustments are, you know, pretty center Democratic. You know, before everybody moved to the far extremes, this was, you know, run-of-the-mill Democratic policies.

When and why you should change your investment portfolio

Brancaccio: But I mean, you know, this is a moment. We’re saving the front pages of the newspapers these days, because they look historic to us. So maybe not a bad time to reflect on your portfolio.

Ritholtz: Sure. So let’s think about it this way: When are the best times to make the sort of changes we’re discussing? And usually it’s when you are objective and you are incorporating major life events: people get married, or they have kids, or some other event creates a future financial liability, meaning, hey, we’re going to have to pay for college 18 years off in the future, or we’re going to be retiring 25 years off in the future. When you have those life events, those major changes, well that’s when you make adjustments to your portfolio.

But, you know, political affairs and headlines? Think back to any major news over the past couple of decades. For the most part, none of this is something that people should use as a basis for changing their portfolios. Now, that said, if you want to own some technology because we figured out, thanks to the pandemic and the working-from-home period, that companies like Apple and Amazon and Google and Facebook and Microsoft are really doing well, and they’re likely to continue doing well no matter what happens. But no one should be making wholesale changes in their portfolio based on which candidate won.

The exception being, if you’re one of those people that are fortunate enough to have $24 million, meaning that anything over that is what is likely to be taxed in your estate. Well, then you have some planning to do if Biden manages to change some of the tax rules, and that’s really just a matter of what you’re doing to minimize, legally, how much taxes you pay. That’s perfectly allowable. But changing your allocation between stocks and bonds, moving to cash — any big change caused by the headlines, that’s an emotional reaction, and emotions are never a good guide star for managing your assets.