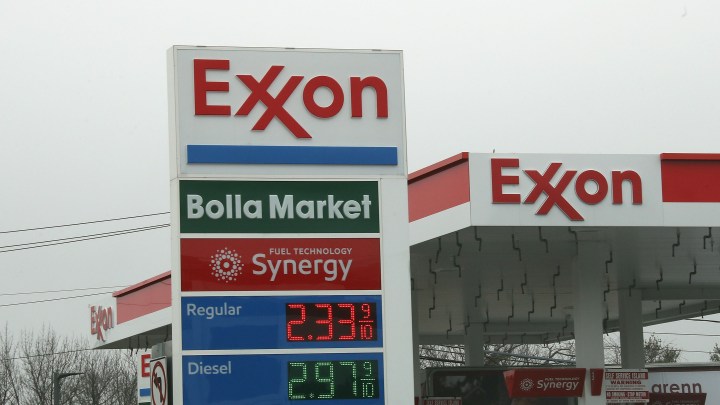 ExxonMobil has announced it will cut roughly 1,900 jobs in the U.S., in what the company calls an ongoing reorganization. The cuts are part of what may wind up being a 15% workforce reduction Exxon said it anticipates.

The company reported a third-quarter loss of $680 million on Friday morning.

Many big oil companies are finding it hard to do business, with crude prices hovering at around $40 a barrel. Just to get oil prices up to where they are now, oil producers had to cut back, said Sarah Ladislaw at the Center for Strategic and International Studies.

“It was really the entire industry putting the brakes on for a period of time,” Ladislaw said.

Demand for oil has come back a bit, but it’s still low because of the pandemic. People aren’t driving as much as they used to — or flying. Jet fuel consumption has been nearly cut in half.

Ladislaw said demand is likely to stay low for a while.

As a result, oil company layoffs will likely continue, said energy economist Philip Verleger. Some companies, he said, will have trouble borrowing money.

The Federal Reserve Bank of Kansas City reports that, in order to be profitable, oil companies say they need crude prices to rise to roughly $50 a barrel.