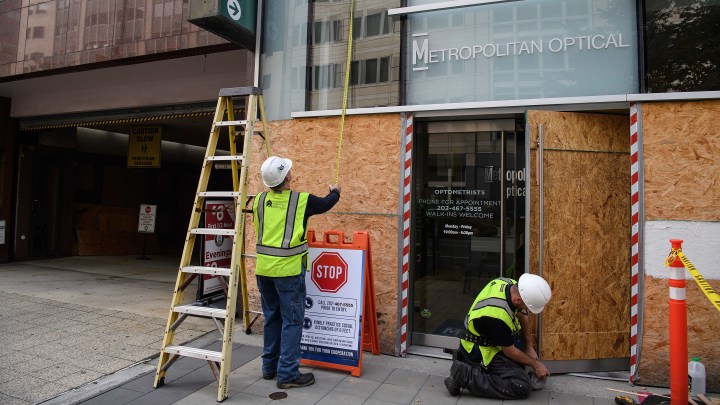 COPY
Workers board up the entrance of an office building in Washington, D.C., on Oct. 28, 2020. Delayed election results could lead to damaged retail storefronts and other infrastructure if violence or protests break out. Nicholas Kamm/AFP via Getty Images
Elections 2020

Workers board up the entrance of an office building in Washington, D.C., on Oct. 28, 2020. Delayed election results could lead to damaged retail storefronts and other infrastructure if violence or protests break out. Nicholas Kamm/AFP via Getty Images
Listen Now

Several major business groups are calling for patience as the presidential election results are decided. A joint letter from the U.S. Chamber of Commerce, the Business Roundtable and other industry groups urged Americans to support the process as the votes are tallied, which the letter said could take “days or even weeks.”

It’s hard to ignore that tensions are high right now, said David French, senior vice president for government relations with the National Retail Federation, which signed on to the letter.

“Taking some of that tension down when it comes to the election process, and reminding everyone that we do have a system with a high degree of integrity, is a healthy activity,” French said.

If people aren’t patient, or if they don’t have confidence in the electoral system, that can cause instability, which is bad for business, said Tensie Whelan, who runs the NYU Stern Center for Sustainable Business.

If a delayed result causes protests or even violence, Anil Shivdasani at the University of North Carolina said, that could hurt retail storefronts, transportation and even ongoing global deals.

“This could have substantial impact on contract renegotiations, potentially even the confidence in the U.S. dollar,” Shivdasani said.

He said that would undermine an already uncertain economy.