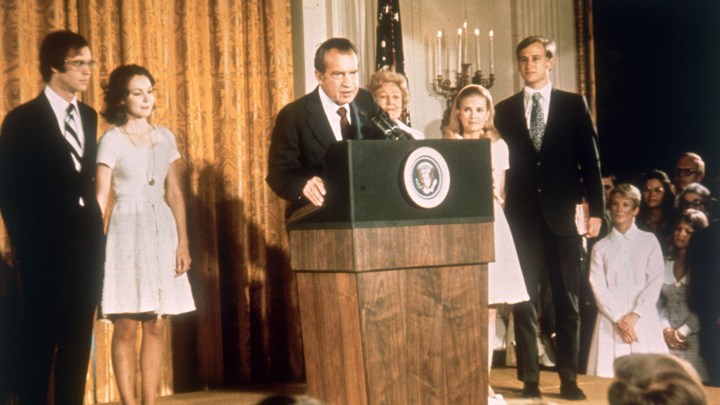 COPY
We know from the Nixon White House tapes that he didn't really believe in wage and price freezes to get roaring inflation under control. Keystone/Hulton Archive/Getty Images
Race and Economy

We know from the Nixon White House tapes that he didn't really believe in wage and price freezes to get roaring inflation under control. Keystone/Hulton Archive/Getty Images
Listen Now

Income inequality is on the minds of many voters right now, much like in the run-up to the 1968 presidential election. Politicians are making promises to level the playing field. In ’68, Republicans said they would “liberate the poor” by modifying welfare work requirements. Democrats vowed to build on 1960s civil rights legislation.

After Richard Nixon won the 1968 presidential election, he got to work on a Republican promise to “attack the root causes of poverty,” agreeing to support a basic income payment, tied to work.

“But, you know, it cost a lot so he really wasn’t for it and just expected it to die in committee, and it did,” said Ken Hughes, a historian at the University of Virginia’s Miller Center.

Congress was controlled by the Democrats in 1968.  It did give Nixon the authority to freeze wages and prices to get roaring inflation under control. But, in their party platform, the Republicans had said they would avoid wage and price controls. And we know from the Nixon White House tapes that Nixon didn’t believe in them.

“The difficulty with wage-price controls and a wage board as you well know is that the goddamned things will not work,” Nixon told his Treasury secretary, John Connally.

Still, in a prime-time TV address just six months later, Nixon announced, “I am today ordering a freeze on all prices and wages throughout the United States.”

Ultimately, Nixon pursued whatever economic policy he thought would help him politically, according to Allen Matusow, a fellow at Rice University’s Baker Institute for Public Policy.

“Whatever the situation is, he’s playing it for its political angle, and it led to many inconsistencies in his policies,” Matusow said.

Nixon was consistent on Republican promises of a crusade against crime. And, systemic racism persisted. Democrats had promised to “spur the pace of urban renewal.” That stalled, leaving most Black homebuyers stuck in run-down, segregated neighborhoods.

“The houses that they were getting were often in terrible condition and in neighborhoods that were only marginally getting city services,” said Adriane Lentz-Smith, who teaches African American studies at Duke University.

Nixon did work with the Democratic Congress on some issues. Still, Democrats’ 1968 promises to build on earlier civil rights gains largely evaporated.