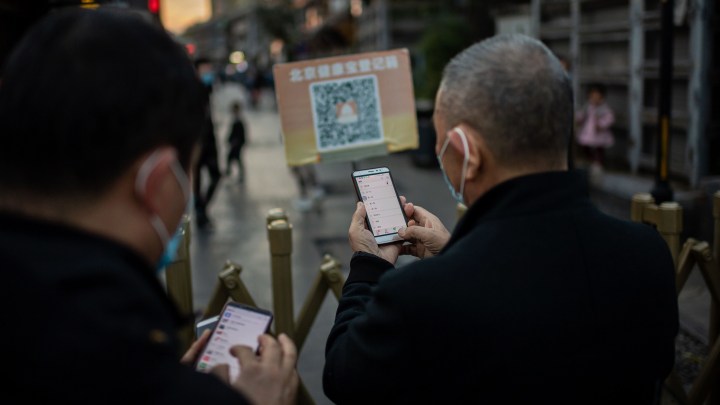 COPY
People scan a QR code with their smartphones to check their health status to enter an area on a Beijing street. As Rivero notes, QR codes are already widely integrated into life in China. Nicolas Asfouri/AFP via Getty Images
COVID-19

People scan a QR code with their smartphones to check their health status to enter an area on a Beijing street. As Rivero notes, QR codes are already widely integrated into life in China. Nicolas Asfouri/AFP via Getty Images
Listen Now

Quick Response, or QR codes were first invented back in 1994, as a way to track automotive vehicles during production, and to scan components quickly. Now, over a quarter century later, they are having a moment in the U.S., as consumers look to reduce contact in their everyday interactions to help minimize the spread of COVID-19. Maybe you’ve noticed them yourself. Many restaurants now have virtual menus that are accessed through QR codes. Digital payment systems with QR technology are also becoming more popular.

Digital payment systems with QR code technology are already widely integrated in China. The country also has been using a color-coded QR code health pass in the pandemic, to control people’s movements and to slow the spread of COVID-19.

Nicolás Rivero is a tech reporter at Quartz who’s been following the technology. “Marketplace” host Kai Ryssdal spoke with Rivero about some of his recent reporting. Below is an edited transcript of their conversation.

Kai Ryssdal: Super quick as we get going here, a lot of people are familiar with barcodes, right? from Long, long ago. QR codes are sort of the next evolution, what makes them different? What makes them
better?

Nicolás Rivero: So the whole magic of a QR code is that it stores information in two dimensions, right? So if you think of a barcode, it’s a series of one dimensional lines. And it can only store so much information that way. Because QR codes are these little patterns of squares, they can store a lot more information, something like a webpages URL, which is why you can scan them and go to a link.

Ryssdal: Okay, so hold that thought for when we get to the what they’re being used for now. But I do want a little bit of history out of you first. Ten years ago, plus or minus, QR codes kind of come on the scene in a biggish way. But as you say, in this piece, they were just terrible.

Rivero: Yeah, there were three big problems with QR codes when they first kind of came out to consumers back in 2010. So the first is, if you wanted to actually scan one of these things, you [needed] to download a separate bespoke app to be able to do it. The second was cellular data at the time wasn’t as good as it is now. So it wasn’t a sure thing that you’d be able to actually load the webpage you were looking for when you’re out and about, which is where you’d come across these QR codes. The third thing is just that no one could actually figure out a good use for them. So a lot of brands came out with QR codes in their advertising because they wanted to position themselves as tech savvy. But they would just do it in ways that didn’t make any sense. Like you’d have, for example, a subway ad with a QR code on it that the only way you could get up close enough to actually scan the thing would be to stand directly on the subway tracks.

Ryssdal: Right, right. Okay, so now here we are 2020. More data is out there floating around. Technology is better. Smartphones mostly can read them pretty easily. How are they being used now?

Rivero: So the use that people probably have seen most often is that as restaurants have reopened, they’ve used QR codes to replace handing you physical menus. One of the more interesting uses, I think, is that PayPal and Venmo have rolled out QR codes for mobile payments in the U.S., which is something that’s been very popular in China. And there’s one more thing as well, which is that there are contact tracing apps, which are using QR codes to be able to kind of give people a way to show that they have tested negative for coronavirus before entering a building.

Ryssdal: And you could see that being sort of the passport thing, right? You get that code you show it on an airline or whatever. And in theory, you’re good to go. Right?

Rivero: Right. That’s like another big big use in China. And we’re slowly seeing maybe some rollout of that in the U.S. Abbott, that company that’s selling 150 million rapid COVID tests to the federal government has an app for that. You take the test. It gives you a QR code. A company can scan it and say OK, you’re good to come in.

Ryssdal: Let me just throw in a really quick cautionary tale here. Most — I’m sure it’s like 80% of the American population has a smartphone. But that leaves 20% of people, which is millions of people who don’t. So that’s one issue. And then another one is if you’re like — and she’s listening to this, I’m going to hear about this later. But if you’re my mom and somebody says no, I’m sorry, you need to do a QR code. [My mom], you know, she tries but she’s not the most technologically savvy person in the world. What do you do for them?

Rivero: Well, that’s exactly right. So this is definitely, as you said, a big point of caution. And something that I think is giving people pause about rolling out QR codes too widely, especially for pandemic uses, like determining whether you can port public transportation or enter a building or something like that.

Ryssdal: Right, and and one would hope there would be some workarounds for the non-technologically savvy amongst us.