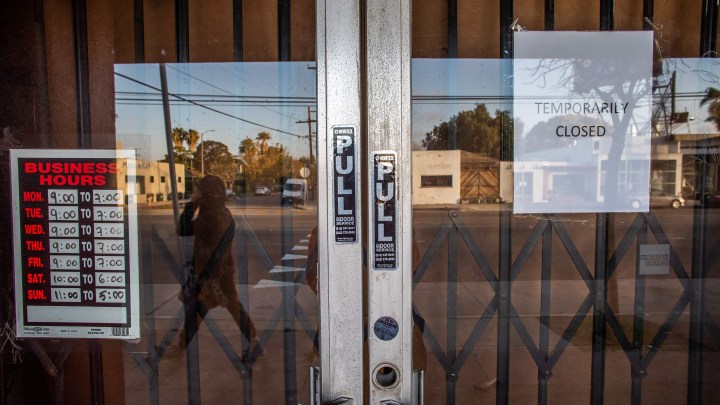 COPY
Tens of millions of Americans are still out of work, and their unemployment benefits are running out. Apu Gomes/AFP via Getty Images
COVID & Unemployment

Tens of millions of Americans are still out of work, and their unemployment benefits are running out. Apu Gomes/AFP via Getty Images
Listen Now

Last week, 787,000 Americans filed first-time claims for unemployment benefits. The Labor Department also revised the previous two weeks downward, and that means since the beginning of October, we’ve seen fewer people filing new jobless claims each week than any time since the pandemic started in mid-March.

But tens of millions of Americans are still out of work. Millions of them are running out of unemployment benefits. And those still on the rolls are no longer getting $600 a week in extra federal payments that expired in late summer.

That is sucking billions of dollars out of this economy, compared to earlier in the pandemic.

Since several assistance programs for the unemployed started running out midsummer, $20 billion is not getting into the pockets of out-of-work Americans each week.

Andrew Stettner, senior fellow at The Century Foundation, said based on Treasury Department data, those Americans were getting $26 billion a week.

“That has come crashing down to just $6 billion,” Stettener said. “It’s much less support to families and to the economy than we had.”

That $600 a week in federal pandemic payments expired at the end of July. The president’s partial replacement program ran out of money last month.

Also, folks laid off back in March and April are now running out of their 26 weeks of state jobless benefits. Some, but not all, are getting a 13-week federal extension.

Unemployment benefits now average $320 a week across the country. It’s even less for gig workers on pandemic unemployment assistance.

And that has made a huge dent in the purchasing power of households suffering unemployment, said Mark Hamrick, senior economic analyst at Bankrate.com.

“They are really having to scrape to get by these days just for basic needs, such as to pay for shelter, pay the bills, put food on the table — and forget about luxuries,” he said.

That’s exactly what Brooke Wetzel has seen play out at her florist business, The Plum Dahlia, in Los Angeles. When the economy started to open up in late spring, sales picked up. But since August, “things have gotten pretty slow [with] people not having that extra $50 or $75 for a flower arrangement,” she said.