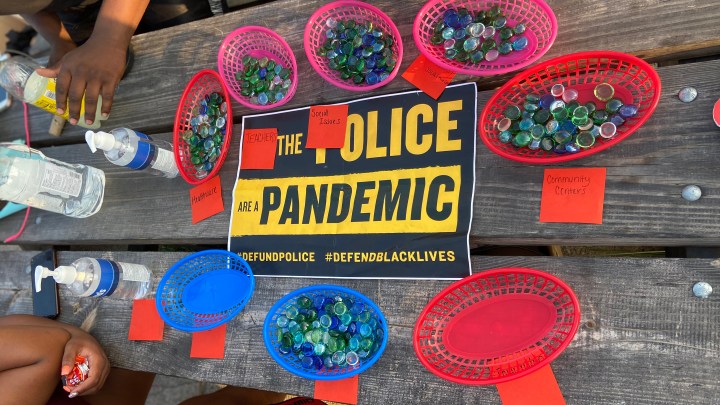 COPY
A group of students in Detroit consider how they would want their city’s schools to rethink their budget at an event hosted by a youth group called Detroit Heals Detroit. Beenish Ahmed

A group of students in Detroit consider how they would want their city’s schools to rethink their budget at an event hosted by a youth group called Detroit Heals Detroit. Beenish Ahmed
Listen Now

About 20 students are moving around a picnic table, trying to figure out how they would spend the school district’s money. They have to decide which basket to put glass pebbles in. Each basket is labeled — “nursing” or “textbooks” — to represent different things that the school district funds.

“You have to tell us how would you allocate the funds,” said Sirrita Darby, who heads a youth organization called Detroit Heals Detroit that sponsored this activity.

By the end of the activity, there’s not a single pebble in the basket marked “policing.”

The Detroit School Board has called for a task force to run a similar exercise, to decide how to respond to community appeals to defund the school police force. The school district employs 55 officers.

“We as an organization are responsible for our employees,” said Misha Stallworth, secretary of the Detroit School Board. “And so when you’re directly hiring someone, if you talk about eliminating a department, you’re talking about taking food out of people’s mouths.”

Mo Canady is the executive director of the National Association of School Resource Officers, a trade group for school police. Those representing school police say cuts would mean more calls to city police, he said.

“And when that help comes it’s going to be a patrol officer who probably does not have that level of relationship with that school,” he said.

Even though Detroit schools have decreased the school police budget by $1 million since 2017, they still spent $7.5 million on policing last school year.