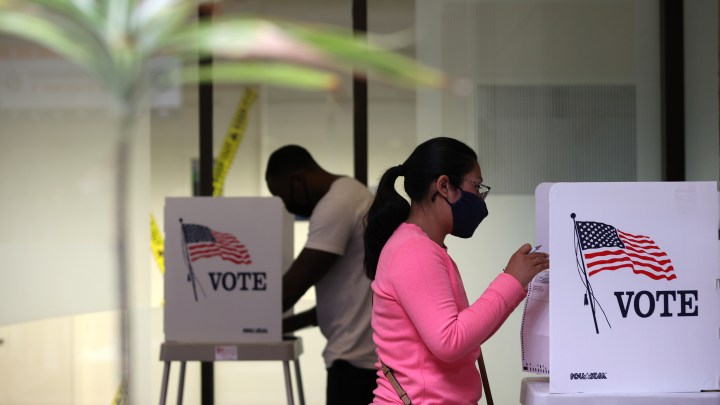 Update: The number of people who have voted in the election has been updated.

More than 12 million people have already voted in the 2020 election. And according to the polls, most of those who haven’t voted have likely already decided for whom they will vote, at least in terms of the presidency.

Yet ongoing legal challenges over just who can vote and how they should be able to vote could make the difference in some swing districts, meaning the outcome of the current election could hang on rulings by various courts.

The COVID-19 pandemic prompted a lot of changes to the ways we vote, with more people choosing to vote early or by mail and states sometimes adjusting rules and regulations about voter access. That has the group Judicial Watch — among others — busy in courtrooms all over the country.

“We’ve got a few lawsuits to try to clean up the rolls,” said Tom Fitton, president of the conservative group. “We file amicus briefs where we can; we’re trying to monitor some of this litigation to see where we can step in. Much of that work, frankly, though, has been done by the folks with the most interest politically, obviously, the [political] parties.”

And the parties are flush with cash this campaign season, dedicating tens of millions of dollars for legal challenges so far, and additionally setting aside resources for potential fights after Election Day. According to numbers from the Center for Responsive Politics, parties and campaigns have received up to $64 million in contributions just for court fights.

Rosalyn Cooperman, a professor of political science at the University of Mary Washington, said the pandemic has played a role in the spike in donations.

“I think that COVID has incentivized giving, particularly for folks who are paying close attention to the elections that are coming down the pike,” she said. “The presidential race, but also the Senate increasingly, has become competitive not just for individual races, but also for majority party control of the Senate. And this provides lots of incentives for folks on both sides.”

And, according to Lynne Rambo, emeritus professor of law at Texas A&M, competitive races are more likely to attract post-election legal challenges.  Rambo has written extensively on the legal challenges following the 2000 presidential election.

“To the extent that you don’t have close races and given state, you’re not likely to have litigation in those places,” said Rambo. “The kinds of contests that go to litigation are ones where it is extremely close. And/or ones where there is definitive evidence that something has gone wrong in the counting, or the balloting.”

But with so many races likely to be tight, and with ballot challenges already occurring, lawyers across the political spectrum are getting ready.

“I think it’s in everybody’s interest to get the issues resolved before the count is completed, before Election Day,” said Karl Sandstrom, a lawyer at the firm Perkins Coie that is working with several Democratic campaigns. Not only are such fights expensive, he points out, but the longer they drag on, the more the damage done to public confidence in American democracy.