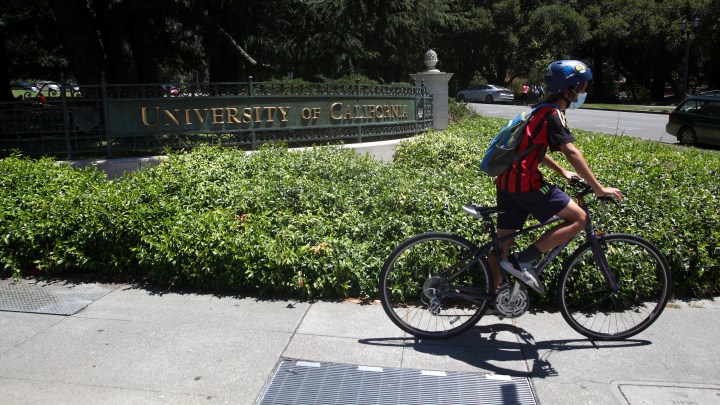 Desteny Lara is 18, and she goes to California State University, East Bay. Like many college students in America, she recently had to leave campus and move back home — she’s from South Central Los Angeles. For her, moving back means living in a two-bedroom apartment with 10 family members and grappling with how to keep her focus.

“When it comes to concentrating and doing work, I normally do it at night, because everyone’s asleep. Everyone’s quiet, and it makes me focus more,” Lara says.

Still, it’s getting challenging. And she says she wonders how much longer she can do this for: “Sometimes I think to myself, is school really worth it?”

This is exactly what educators and experts are worried about. COVID-19 and the ensuing economic crisis is putting even more pressure on low-income and first-generation college students. It’s starting to show: So far, there’s been a decrease in students applying for financial aid — especially from low-income students. Around 100,000 fewer high school seniors completed the Free Application for Federal Student Aid, or FAFSA, to attend college this year.

Michele Siqueiros, president of the California-based advocacy organization Campaign for College Opportunity, says the irony is, higher education “is absolutely the only path often for low-income students out of poverty.”

With the average student loan debt at around $30,000, the inaccessibility of a college education was a problem long before COVID-19. Black and Latino college education levels lag far behind whites, and many worry that the pandemic will make it worse.

Brian Troyer, dean of undergraduate admissions at Marquette University in Wisconsin, says he’s heard a lot of student concerns about financial instability since the spring. They include questions like “What happens if our family situation changes? Might I qualify for financial aid?”

In August, the U.S. Census Bureau found students from families with incomes under $75,000 were almost twice as likely to say they canceled plans to attend college than students from wealthier families. “That’s worrisome,” says Siqueiros. “Because we know that when students, especially when low-income students leave higher education, the probability of them returning is highly unlikely.”

Back in South Central LA, Desteny Lara just took on a new job at a fast food restaurant, to make ends meet. She’s worried about juggling school and work. But then she remembers that she’s the first one to make it to college. And that’s a really big deal in her family. “My whole family basically looks up to me. Like my siblings, my cousins. Like [they say] ‘if she can go to college, then you can go to college, too,'” she says.