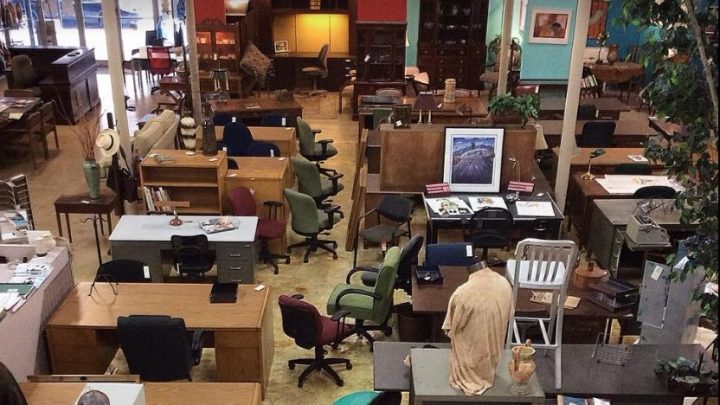 COPY
Wayne and Lynda Hogan started their office furniture business in 1982. From their storefront in North Little Rock, Arkansas, they've witnessed the economy's ups and downs. Courtesy of Galaxy Office Furniture
My Economy

For those in the business of buying and selling used office furniture, the interconnected trends of companies downsizing and workers setting up permanent home offices presents an opportunity.

“In any downturn like this, there’s opportunity to pick up deals,” said Wayne Hogan of Galaxy Office Furniture in North Little Rock, Arkansas.

From their storefront in the Argenta Arts District of North Little Rock, Hogan said he can see consumer preferences change along with the economy.

“Whenever business is good, we’re selling a lot of new office furniture,” he said. “When the economy is slow, they get a little more frugal.”

On the selling side, Hogan said there’s high demand right now for small desks as people carve out spaces to work and learn from home. “[Customers are] looking for smaller desks to replace that kitchen table office,” he said. “You’re not going to sell them a 6-foot desk.”

On the buying side, Hogan said there’s a lot of used office furniture available as companies downsize or close physical offices permanently.

“That part of our business is kind of like a catfish,” he said. “We just kind of pick up what’s on the bottom and keep everything stirred up.”