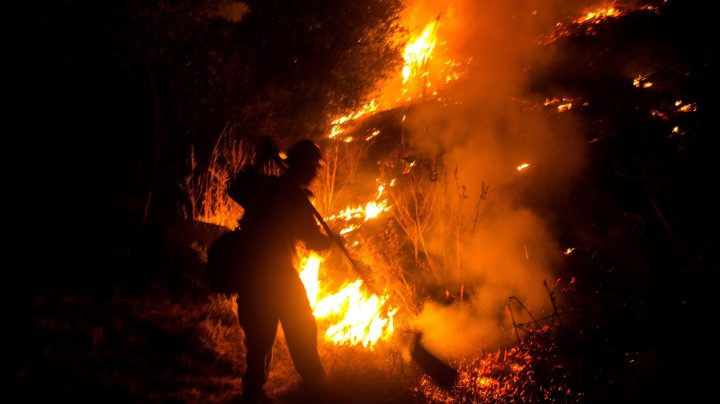 A firefighter works at the scene of the Bobcat Fire burning on hillsides in Monrovia, California. Ringo Chiu/AFP via Getty Images

A firefighter works at the scene of the Bobcat Fire burning on hillsides in Monrovia, California. Ringo Chiu/AFP via Getty Images

Deadly wildfires continue to spread across the West Coast, displacing residents and leaving those that remain struggling to breathe because of the dangerous air quality.

Masks and air filtration systems are crucial for the millions of residents near the wildfires, but many of these supplies have been difficult to obtain because of cost, inadequate supply and shortages due to the COVID-19 crisis.

Filtering masks like N95s, which block out 95% of airborne particles, can help provide protection, but they’ve been in limited supply, with experts saying they should be reserved for health care workers unless you’re outside for extended periods.

Portland, Seattle and San Francisco now have the worst air quality of any major city around the world, according to the group IQAir. Farmworkers, who are spending all day outside in these conditions, have been especially vulnerable.

The COVID-19 crisis put a strain on the supply of masks and there are also new customers (like schools and private companies) that now require personal protective equipment, which has fueled demand, explained David Daniel Dobrzykowski, associate professor at the Sam M. Walton College of Business at the University of Arkansas.

Dobrzykowski, who’s also the school’s director of the MS program in supply chain management, said that about 70% of the manufacturing of these masks happened outside the U.S. prior to COVID-19, creating bottlenecks in the supply chain.

And during the early days of the pandemic, he said the United States’ focus at first was not on new sources of supply, but looking at the existing supply chain to increase capacity. While companies like 3M announced plans to triple its monthly domestic production of N95 masks, Dobrzykowski said that was still “drop in the bucket when you’re talking about the kind of increases that we had.”

Jess Campbell, executive director and organizer of the Rural Organizing Project — a network of groups throughout Oregon that works to advance democracy in the state — explained that there are also issues when it comes to the distribution of these items.

“When COVID kicked off, there were a lot of truckers that were very afraid of spreading COVID,” she said. “Now, with the fires that are so rampant here, we have huge swaths of the state that don’t have very accessible routes.”

Campbell added that many people live in areas where there aren’t a lot of stores to begin with.

“Certainly I know, in my own community, we kind of have big chains. When Walmart came in, a lot of the mom-and-pops were ran out of business,” she said. “And so that means that we’re really beholden to their supply chains.”

In response, community organizers and groups have been stepping in to provide residents with essential items. The Rural Organizing Project has a hub in the city of Cottage Grove, where it’s been helping people find shelter and distributing food and masks.

“There’s been a really helpful crew of people in Portland who actually loaded up a U-Haul of masks and brought them down here,” Campbell said. “Because there’s nowhere that we can kind of buy within two hours of here in stores.”

Alessandra de la Torre, the energy community justice organizer at Rogue Climate in southern Oregon, has taken a similar approach. She says it’s been hard to find N95 masks at mainstream stores, so they’ve been getting shipments from other places in the country with N95 masks, like New York.

Rogue Climate has also created the Rogue Valley Relief Fund with other organizations to help purchase tents, meals, gas and other supplies for people in need, and plans to help people find housing in the long term.

There are some items, like air purifiers, that can end up costing hundreds of dollars, making them cost prohibitive for many.

Because of the high costs, Tracey Corder, an organizer based in Oakland, California, created a Google Form that allows people to request air purifiers, and works with a team of five other volunteers who help send them to residents in the area.

“We’re still in a pandemic. People have lost their jobs. There’s a loss of wages,” Corder said. “And it’s a pandemic that targets our respiratory system, so this only makes it worse.”

So far, they’ve been able to distribute more than 600 purifiers and are working to fulfill hundreds of more requests.

“We’ve already started getting text messages from people who are telling us this is the first time they’ve been able to breathe in their home in days,” Corder said.

As residents in the West Coast struggle to find adequate supplies needed throughout the wildfire crisis, many have been able to turn to one another.

“There are a lot of folks who are getting absolutely no help or no notice or no communication about needing to evacuate,” Campbell said. “People are showing up for each other because there’s no infrastructure from the state or elsewhere to show up for folks. So right now, it’s about survival.”