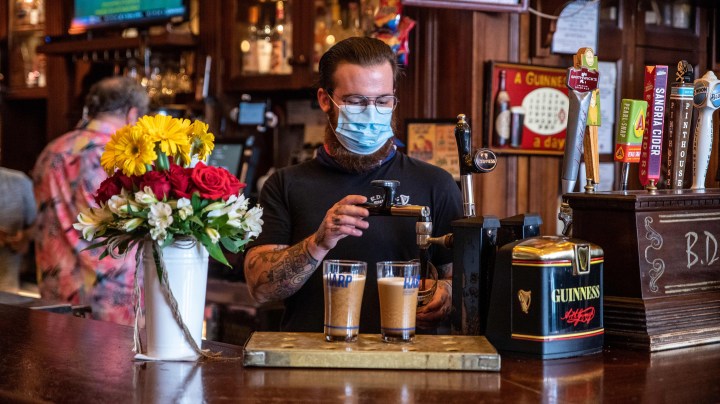 COPY
A bartender pours drinks for customers in Austin, Texas, in May. There's a lot of churn in the labor market due to COVID-19. Sergio Flores/AFP via Getty Images
COVID & Unemployment

A bartender pours drinks for customers in Austin, Texas, in May. There's a lot of churn in the labor market due to COVID-19. Sergio Flores/AFP via Getty Images
Listen Now

Another week, another startling number of Americans getting laid off from their jobs.

For 25 weeks now, first-time claims for unemployment benefits have been elevated, to say the least. And contrary to some economists’ expectations, claims filed last week were just as high as the week before — 884,000. Claims actually went up under the federal emergency-pandemic unemployment programs.

All told, 29.6 million workers were getting unemployment benefits at the beginning of September. Also, we found out last week that more than a million jobs were added in August, and unemployment fell almost 2%, which is a lot.

Is your mental math reeling from all these job-numbers? The pandemic has thrown us record job gains and losses.

And AnnElizabeth Konkel, an economist at the Indeed Hiring Lab, said that’s partly because the initial massive shutdown in March was followed by piecemeal re-openings and re-closings.

“There’s so much churn in the labor market right now, and that is the nature of coronavirus,” Konkel said. “We have these clusters, cases pop up, they go down, and then it pops up in another state.”

Case in point for this churn: bartender Ryan Van.

In March, he went on unemployment when the Michigan bar where he’s worked for a decade shut down. It got to reopen in June — with a lot of restrictions.

“We had 10 really strange days where we were trying to figure out how to run a bar,” Van said. “I’ve never had to hold three bottles at the same time while wearing latex gloves.”

His re-hire lasted a week and a half. Business was slow, he went on unemployment again, and he doesn’t know when he’ll go back to work.

Daniel Zhao, a senior economist and data scientist at jobsite Glassdoor, says employers keep laying off millions of workers in sectors that are still reeling.

While at the same time, “employers are needing to hire to meet new shifts in consumer demand,” Zhao said.

Small-business owner Lenore Estrada has gone through this dance multiple times. She runs a bakery in San Francisco and laid off most of her 26 employees when COVID hit in March.

“We got PPP [in April], and so at that time we brought back a bunch of people,” Estrada said.

Meanwhile, she shifted her business from baking for companies like Google to doing more deliveries and farmer’s markets and teaching baking classes.

“We sort-of needed to hire some new people, with different sets of skills,” Estrada said.

In August, her PPP money ran out, and she did some more layoffs. She says it’s not clear what the fall and the holiday season will bring.