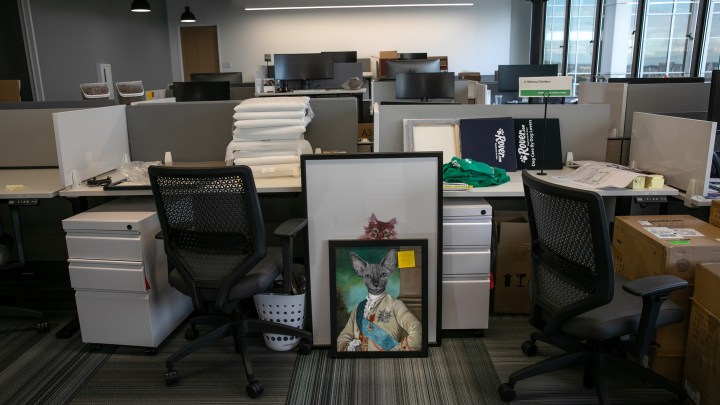 COPY
An empty office in Seattle, Washington. Returning to the office to grab supplies for home can bring up unexpected emotions. John Moore/Getty Images
COVID-19

An empty office in Seattle, Washington. Returning to the office to grab supplies for home can bring up unexpected emotions. John Moore/Getty Images
Listen Now

Workers around the country are hearing that they won’t be returning to their offices until next year, at the earliest. So a lot of people are going back in for the first time since March to pick up an office chair or plant, or deal with that sandwich they left in the fridge. That can be a bizarre and emotional experience. We asked a couple of our listeners to record themselves as they made that trek.

On a Saturday morning in late August, Tony Orr is sitting in his car outside his office building in a suburb of Philadelphia. Orr, a lawyer for a solar power company, came back to grab some stuff. He hasn’t been here since March.

“Now that I’m looking at the front door, it’s that weird mix of like, really familiar and totally foreign,” he says.

“It kind of feels like when I go back to my hometown in the Midwest — you know where everything is and you know the roads, but then you notice all the things that have changed.”

Like the trees that got knocked down during a recent storm.

He throws on some rubber gloves and a mask and heads inside, where he takes the elevator to the third floor.

Orr has been cautious during the pandemic, so he’s a little nervous when he gets there and sees some lights on.

“Hopefully that doesn’t mean somebody’s here,” he says. “But I guess I will find out.”

On a different morning, across the country in Seattle, Vincent Chan is venturing outside his home — rare for a weekday.

He’s in his car at a stoplight, on the way to pick up some things from the office, like a photo of his husband and their dog that he kept on his desk.

“I really miss this morning sun, actually,” he says. “It’s nice to be outside.”

Chan, who works at a fintech startup in a downtown skyscraper, used to have a routine. He’d wake up around 5:30 a.m., go for a run, shower and then head to the office. But these days, “I just roll out of bed and hop directly into work with a bowl of cereal in my hand,” he says.

Outside his company’s suite on the 21st floor, he’s required to take his temperature with a no-touch thermometer on the wall.

He scans his security card at the door. It won’t open.

A new way of working

Back in Pennsylvania, Tony Orr gets through his office door just fine. No one’s around.

“It’s really weird being in here,” he says. “A few of my colleagues have been coming in from time to time. Looks like one of them completely redecorated his office.”

He walks down the hall to his personal office.

Everything is just where he left them: his cactus, half of which are now dead. A pile of receipts, which he’s not sure he ever submitted for reimbursement.

His final stop is the fridge. He’s looking for some craft beers a co-worker gave him in March.

He opens the drawer. It’s empty.

“Darn,” he says. “I was really looking forward to those.”

Beer theft aside, he does miss his co-workers. But not much else.

“You know, commuting in I was thinking, OK, well, I don’t really miss driving every day,” he says. “So mixed feelings as I grab my box and head back out to the parking lot.”

He says he can’t imagine doing five days a week in the office again.

In Seattle, Vincent Chan is stuck in the vestibule outside his locked office, looking through the glass.

The furniture has been moved around, and he notices a giant Pikachu stuffed animal that used to live at someone’s desk.

“He’s just sitting in one of the chairs that isn’t upside down,” Chan says.

He gets a message from HR. They can’t get in touch with the person who could give him badge access. Chan is not getting in today.

“I don’t have any more reason to be here, but I just can’t help myself,” he says. “I’m just standing here looking at the office. It’s so close.”

Eventually he gets in his car and drives home.

“It feels like not getting closure,” he says. “That was my opportunity to say goodbye to the office for however long this goes on. And I don’t get that.”

Later that day, he tells me that he knows how lucky he is to still have a job, especially one where he can work from home. But this whole thing has been hard. He doesn’t know when his company will send him back to the office, if ever. And like a lot of us, he hasn’t had the chance to grieve his old life.