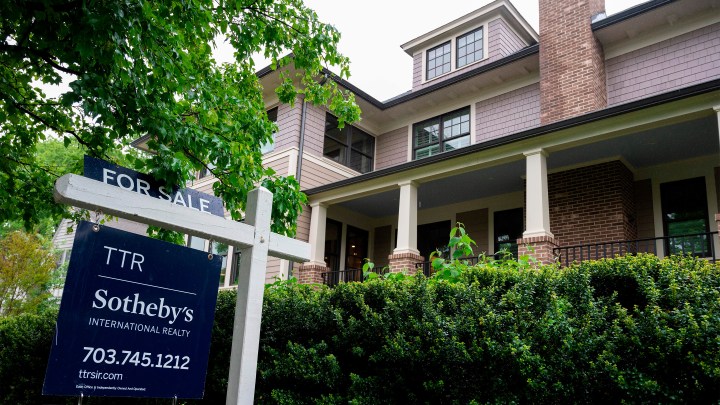 COPY
A house for sale in Arlington, Virginia, in May. Thanks to low interest rates, affordability has improved in many locales in the U.S. Andrew Caballero-Reynolds/AFP via Getty Images

A house for sale in Arlington, Virginia, in May. Thanks to low interest rates, affordability has improved in many locales in the U.S. Andrew Caballero-Reynolds/AFP via Getty Images
Listen Now

Millions of people have lost their jobs. Small businesses could start to collapse at a terrifying clip. The pandemic rages on. And yet, the housing market is kind of … booming.

The S&P CoreLogic Case-Shiller National Home Price Index, released Tuesday, showed that prices of existing homes rose 4.3% in June from the same time last year. Meanwhile, a frenzy in sales of new homes in July pushed prices up more than 7% from a year earlier.

The reason is simple: There is still more demand than supply.

Even so, Fleming said, buying a house is more affordable today than it was a year ago.

“You would think [higher prices] would make things more unaffordable, but at the same time you have absolutely historic lows on mortgage rates,” he said. “In particular, the 30-year fixed-rate mortgage dropped below — this is heresy to say it — 3% in July.”

That offsets higher prices by reducing monthly mortgage payments, making homes more affordable. First American’s Real House Price Index, which adjusts for income and interest rates, is down almost 5% from a year ago.

That’s nationally, though. In cities hard hit by job losses, like New York, Pittsburgh, St. Louis and Orlando, Florida, affordability has declined, Fleming said, “because even with low rates, your incomes have gone down in recent months.”

That could spread to more markets if the economy — and unemployment — get worse. There’s also more to affordability than the monthly payments, said Daryl Fairweather, chief economist at Redfin.

“When you look at how prices have gone up, that creates a big barrier for down payments because you still have to put down 20%, if you’re going with a conventional loan,” she said.

“What’s happened over the last decade is that there haven’t been enough homes built for everybody who wants them,” she said. “Homes are being built right now despite all the lockdowns that are happening, but it’s going to take a long time to dig us out of the hole.”