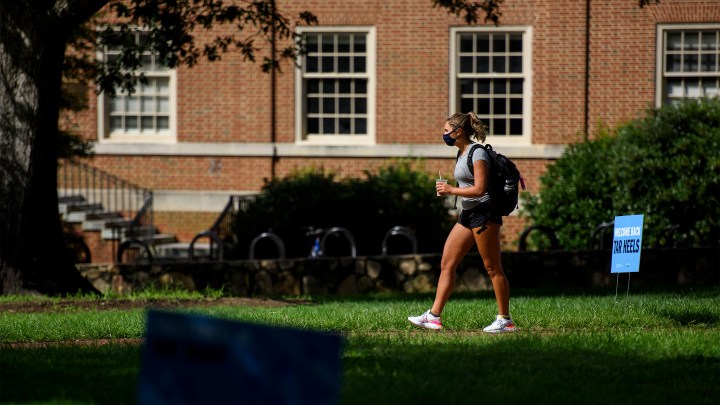 It hasn’t been a very good week on some campuses that had opened for in-person classes.

The University of North Carolina Chapel Hill Monday moved all classes online after more than a hundred students tested positive for COVID-19. Notre Dame Tuesday moved instruction online. Michigan State scrapped in-person classes before they’d even started. This isn’t what a lot of students signed up for — and they may want their money back. But that might not be so easy.

Sandy Baum, a senior fellow who studies higher education at the Urban Institute, said the rules are all over the place.

“There is no uniform policy about under what circumstances students would be owed tuition because of these unanticipated changes,” she said.

Every college sets its own policy. Some won’t refund a penny. Others will do a partial refund up to a certain point in the semester. Still others are handing out vouchers for future tuition.

If that’s too much uncertainty for you, how about an insurance policy?

Some insurers offer coverage that reimburses students for tuition if they get COVID-19 and have to leave school. John Fees, the co-founder of GradGuard, an insurance company that works with 366 schools, said he’s been pretty busy.

“The college gets the benefit of knowing that they’re gonna still get their bills paid by the family even if the student is forced to withdraw,” he said.

And you could go to court. There are already more than 200 lawsuits against institutions of higher learning regarding tuition refunds.

Christopher Marsicano, director of the College Crisis Initiative at Davidson College, said he doesn’t think the lawsuits will amount to much because “these institutions are still providing an education even if it wasn’t the one that we all wanted to have happen.”

And he said if you aren’t happy with your refund — or lack thereof  — you can always take your business elsewhere.