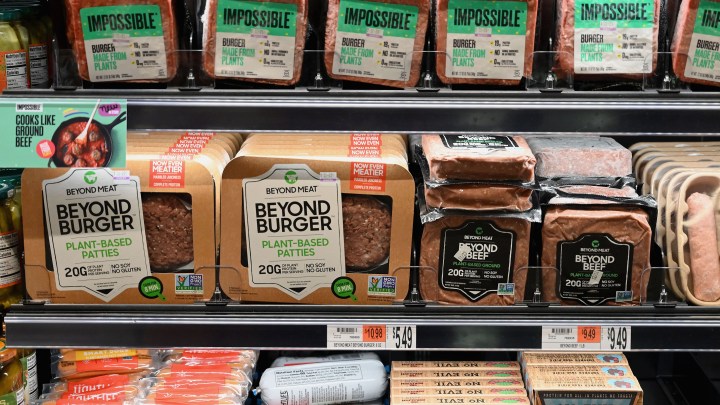 COPY
Packages of meat alternatives for sale in a New York market. Most customers are not vegetarians but people who eat less meat for health or environmental reasons. Angela Weiss/AFP via Getty Images
COVID-19

Packages of meat alternatives for sale in a New York market. Most customers are not vegetarians but people who eat less meat for health or environmental reasons. Angela Weiss/AFP via Getty Images
Listen Now

Beyond Meat will report earnings Monday after the bell, and it’s unclear how things will shake out for the meat-substitute company amid the ups and downs grocery stores and restaurants are dealing with because of COVID-19.

At the beginning of the pandemic, the biggest competition facing meatless meat was, well, meat.

“When consumers started to stock up, they actually gravitated towards more familiar items,” said Dasha Shor, a global food analyst at Mintel.

That’s because the biggest market for companies like Beyond Meat isn’t vegetarians, but meat eaters who Shor calls “flexitarians” — people who eat less meat for health or environmental reasons.

But home cooks got tired of eating the same thing. Then, in April, there was the meat shortage, when some grocers limited purchases and prices went up.

“This was really an opportunity for plant-based meat companies like Beyond Meat to really go out and grab some new customers,” said Arun Sundaram, an analyst at CFRA Research.

Still, things aren’t rosy at restaurants, which make up half of Beyond Meat’s sales. And Sundaram isn’t sure grocery sales will keep growing if the recession continues.

“Obviously, because people are going to be trying out less things if their wallets are pinched,” he said.

Beyond Meat’s Beyond Beef product, for instance, can run around $9 a pound.