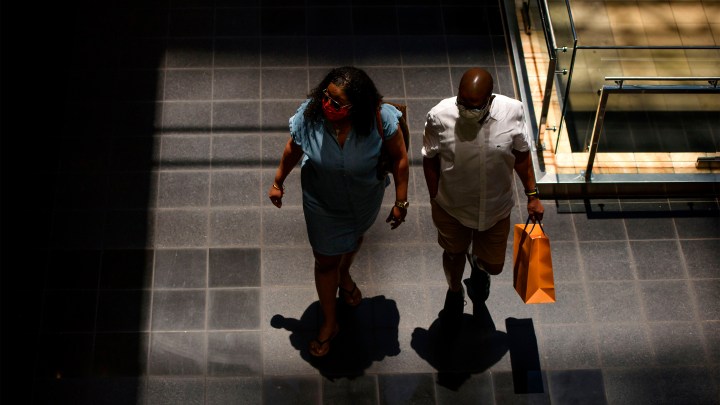 COPY
Shoppers at a reopened Texas mall in May. The current surge in coronavirus cases is bringing new woes to retailers. Mark Felix/AFP via Getty Images

Shoppers at a reopened Texas mall in May. The current surge in coronavirus cases is bringing new woes to retailers. Mark Felix/AFP via Getty Images
Listen Now

There’s been a lot of bad retail news over the past few days.

Brooks Brothers, as we told you yesterday, has filed for bankruptcy. Ascena, the parent company of Ann Taylor and Lane Bryant, is also reportedly prepping a bankruptcy filing. Levi’s will cut 700 jobs. Bed Bath & Beyond will close 200 stores.

There was a brief moment around the beginning of June where there was a glimmer of hope that America might be turning a corner in this pandemic and that the economy could, perhaps, start to recover. Now, as cases rise, hospitals fill up and businesses close for a second time, it’s clear that’s not happening. And that’s created a sort of tipping point in retail.

America quite simply does not have this pandemic under control. And that’s starting to sink in for retailers. Mark A. Cohen is director of retail studies at Columbia Business School.

“Until there’s a vaccine and/or effective palliative drugs, unless this mutates into something less infectious, we’re in for a terribly bumpy ride,” Cohen said.

​A bumpy ride especially in retail. When people don’t have jobs, they’re less likely to spend money. And with virus cases growing, they also feel less safe going out shopping.

So since it looks like this is the new normal, Cohen said, retailers have to start making changes for the long term.

​”If they’re doing business on the internet, as many are, they’re going to have to get more effective and efficient,” Cohen said.

They’ll have to figure out what customers want to buy now, in this weird new world. If not back-to-school clothes or office wear, then what?

​”They’re also going to have to reconcile themselves to the fact that the economic damage that this pandemic has brought with it and will continue to bring with it is going to necessarily cause their performance to change,” Cohen said.

They’re just not going to do as well as they would have otherwise. So they’ll have to shrink. Joel Bines is a managing director at AlixPartners.

​”If you think about the costs that retailers have, merchandise is first, people is second and rent is third,” Bines said. “The first thing that they’re going to do related to merchandise is buy less, which will have an impact on the global supply chain.”

​”And then the next thing they’re going to do with rent is reduce,” Bines continued. ​

In other words, close stores. And potentially file for bankruptcy.