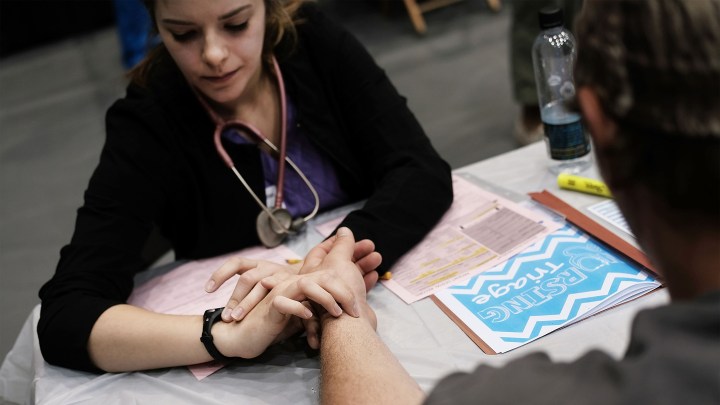 Dr. Mukesh Gopalakrishnan is an emergency cardiologist at a retirement community an hour outside of Tucson, Arizona.

“I’m the only cardiologist who is there at least five days of the week,” he said. These days he sees a lot of COVID-19 patients. He was born in India and is here on an H-1B visa.

In America, around 28% of doctors, 35% of home aides and 20% of nursing assistants are foreign born, according to the National Foundation for American Policy.

For many international medical students, the way to stay in the United States after graduation is by serving at-risk communities with an H-1B visa. That includes rural areas, much like where Gopalakrishnan is practicing. Rural areas benefit; last year, they accounted for 66% of the areas designated by the federal government as having health care provider shortages.

It’s an arrangement that might be in jeopardy. On Monday, President Donald Trump temporarily suspended new work visas, barring hundreds of thousands of foreign nationals from seeking employment in the United States.

The order will be in effect until at least the end of the year, and it includes highly skilled workers entering the country under H-1B visas — one of the biggest work visa programs that the United States offers. The health care industry, as a whole, has raised concerns.

Richard Burke of Envoy Global, which prepares visa applications for businesses like hospitals, said the issue is simply supply and demand.

“U.S. citizens — students — are not graduating at the requisite levels with stem degrees to address this shortage, which is only going to get more profound,” he said.

The Trump administration has said the freeze on work visas will protect jobs that could go to American workers. Mahsa Khanbabai, an attorney with the American Immigration Lawyers Association, said that won’t happen.

“You need these H-1B physicians who are willing to go to Alabama, Georgia, you know, parts of the beltway that just don’t have enough doctors,” she said. “And now this sends a signal to all of them: Look, we don’t care about you, we don’t want you to work here in the United States.”